The combination of underinvestment in new oil wells and rising demand underscores what might be a long period of high prices for energy commodities. Meanwhile, many oil and gas stocks are still trading at low valuations to expected earnings despite a sector-wide rally stretching back to the end of 2020.

Even though the energy sector of the S&P 500 SPX, -1.14% is the only one to rise this year, investors seem still to be at an early stage of a lucrative multi-year cycle.

Simon Wong, an analyst with Gabelli Funds in New York, and Charles Lemonides, chief investment officer at ValueWorks in New York, each named their favorite oil stocks during interviews. Those companies are listed below.

Underinvestment is good for oil industry and investors

Back on March 2, Sam Peters, a portfolio manager at ClearBridge Investments, provided this chart for this article that featured two of his energy stock selections: 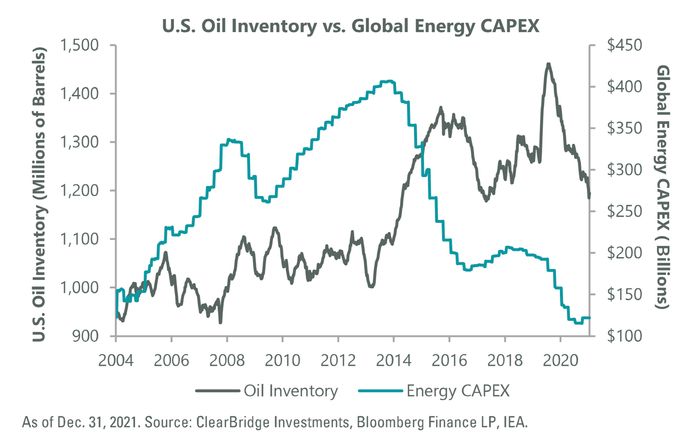 Oil producers had already been stung by the price collapse that began in 2014. But the action during early pandemic shutdowns in 2020 briefly took front-month contract prices below zero. Those experiences have caused managers of oil companies to shy away from making typical capital spending commitments at a time of high demand. The focus is still on maximizing cash flow and returning cash to investors through dividends and share buybacks.

In the previous article, Peters recommended two stocks: EQT Corp. EQT, +4.69%, which rose 50% from March 1 (the day before the article with his recommendations was published) through May 10, and Pioneer Natural Resources Co. PXD, +1.01%, which rose 4%. Those price increases exclude dividends — Pioneeer’s dividend yield is 6.96%.

“ We don’t need $ 100 oil. If oil stays above $ 80, these companies can still produce a lot of free cash that they can return to shareholders.”

Oil prices have been quite volatile of late, with so many different forces in play, including Russia’s invasion of Ukraine, which directly disrupted oil markets; China’s aggressive lockdowns of cities to quell new outbreaks of the coronavirus; and the reopening of travel in many markets around the world, including the U.S. These and other factors have helped cause the price of West Texas Intermediate crude oil CL.1, +5.45% to swing as much as 13% from an intraday high ($ 111.37 a barrel on May 5) to an intraday low ($ 98.20 on May 11) this month alone.

Wong estimated that as 2022 began, world demand for crude oil ranged from 100 to 101 million barrels a day, while oil was being produced at a rate of about 98.5 barrels a day.

Wong said new oil sources in the U.S. over the past 10 years had been mostly “short-term supply growth” because “you lose 50% to 70% in the first year” of a shale well’s operation.

“The U.S. can bring supply back,” he said. But this hasn’t started yet, because “shareholders want operators to be more disciplined.” Wong also pointed to a difficult political environment for pipeline construction, increasing regulations and difficulty borrowing from banks all increasing the cost of new source development.

Altogether, the oil scene is “bad news for consumers but good news for investors,” Wong said. “We don’t need $ 100 oil. If oil stays above $ 80, these companies can still produce a lot of free cash that they can return to shareholders,” he added.

Wong pointed to Canada as a friendlier market for U.S. investors because Canadian wells tend to last 20 to 25 years, by his estimate.

Among U.S. producers he likes are Exxon Mobil Corp. XOM, +3.02% for the long term, in part because of its large investment in offshore development in Guyana, with potential reserve development of 10 billion barrels, by his estimate.

Lemonides pointed to “a huge opportunity for investors getting in today,” following such a long period during which production investment wasn’t economically feasible. His advice is to look beyond the current “gyrations” in the energy market because “the general direction of economic growth is likely to be strong.”

He listed three oil stocks that he sees as being heavily discounted now — all three emerged from pandemic-driven bankruptcies:

Here’s a summary of forward P/E ratios (except for Tidewater, which is expected to post net losses in 2022 and 2023) and opinions of analysts polled by FactSet of the eight stocks discussed by Wong and Lemonides. The table uses Canadian stock tickers for Suncor and Meg Energy; share prices and targets are in local currencies:

Click on the tickers for more about each company.

Read Tomi Kilgore’s detailed guide to the wealth of information for free on the MarketWatch quote page.

Where Should I Retire?: We love to ski but are struggling even with a $1 million house budget — what’s an affordable ski town where we can retire?

Key Words: Mental-health advocate Naomi Osaka is back at the French Open: ‘For the most part, I think I’m OK.’