This week’s violent U.S. stock-market turnabout may have left investors feeling shaken, but a liquidation phase that may finally be under way will probably need to “get hotter” before it burns itself out, a top Wall Street chart watcher warned on Friday.

A remarkable thing about the market’s wild two-day swing Wednesday and Thursday is that market internals — indicators measuring things related to the number of advancing stocks in an index versus declining stocks — were whipsawed, too even though they tend to be “less fickle” than prices, said Jeff deGraaf, founder of Renaissance Macro Research, in a Friday note.

This week saw strong internals as equities surged higher following Wednesday’s Fed meeting, while the Thursday selloff was accompanied by one of the worst set of internals, with just 5% of Russell 3000 RUA, -0.79% stocks advancing amid 8% up volume, he noted. (see chart below).

DeGraaf noted that back-to-back swings in the internals on the scale seen this week are rare, with the last one occurring close to the COVID lows in stocks of March 2020. Indeed, investors had never seen a swing in internals as severe as Thursday’s before the financial crisis of 2008-09 (see chart below). 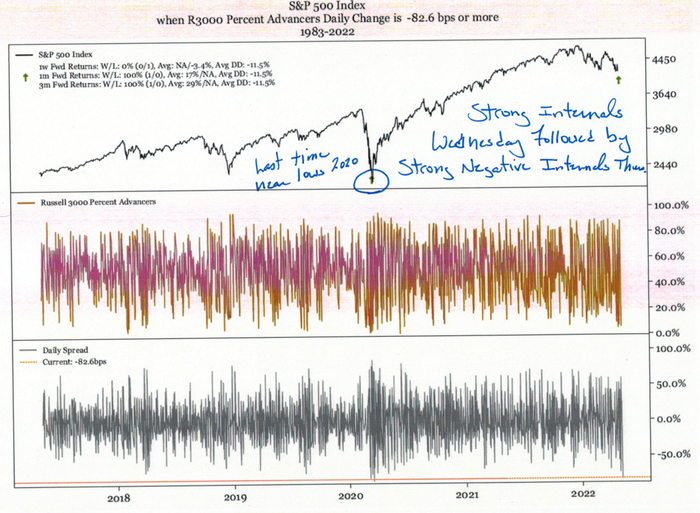 But before talk of the COVID low gets would-be bulls too excited, the analyst warned that the market might have a way to go before it exhausts itself. Meanwhile, the S&P 500’s drop below Wednesday’s low, meanwhile, turned a call for a stock-market bounce into “toast.”

“We’re getting into a liquidation environment, and while those often burn themselves out, they get hotter before they do,” deGraaf said.

Market watchers who doubt stocks have yet bottomed have also noted the lack of a convincing rise in the Cboe Volatility Index VIX, -3.24%, or VIX, an options-based measure of expected 30-day volatility in the S&P 500. Market bottoms often come as the VIX, a proxy for trader jitters, spikes, but the rise in the index this week has been relatively subdued.

The VIX topped 35 in early action Friday, above its long-term average below 20, but has failed to take out last week’s high above 36, much less the March high above 37.

“This suggests that investors believe an even deeper selloff may occur over the coming months with the Fed expected to once again raise interest rates by 50 basis points at the June meeting,” said Robert Schein, chief investment officer at Blanke Schein Wealth Management, based in Palm Desert, Calif., with roughly $ 500 million in assets under management.

“If investors truly believed the bottom was near, we would likely see an even higher VIX,” he said, in emailed comments.

Capitol Report: The Biden stimulus plan moved forward today; here are the biggest parts of it