It can be challenging to resist the call of meme stocks, given their ability to skyrocket. For example, GameStop GME, +0.05%, perhaps the best-known meme stock, jumped to $ 190 from $ 78 over just a two-week period in March, for example — a 143% gain. A basket of 16 meme stocks that investment researcher Morningstar created last December didn’t do quite so well, but still performed spectacularly — gaining an average of 49% over the same two-week period.

But resist you must. The reason: These stocks’ extraordinary volatility. If you’re willing to incur that much volatility, you most likely could make more simply by investing in an index fund with whatever margin is required to match the volatility of whatever meme stock has captured your fancy.

A focus on volatility is a crucial part of judging investment performance. Finance 101 teaches us that, other things being equal, a more volatile security should produce greater returns over time in order to compensate investors for that volatility. The question for any one security in particular is not whether it makes more money but whether that is more than enough to provide this compensation.

Consider the ARK Innovation ETF. It has handily beaten the market since its inception in October 2014, producing a total return of 17.5% annualized versus 13.3% for the S&P 500. The ETF has also been more than twice as volatile. Is beating the S&P 500 by an annualized margin of 4.2 percentage points enough to compensate for that risk?

To find an answer, I followed the methodology proposed in a study a number of years ago by John Graham and Campbell Harvey, both finance professors at Duke University. They devised a way to evaluate a fund’s performance by comparing it to a hypothetical index portfolio with sufficient leverage so that its volatility and other statistical characteristics matched that of the fund. 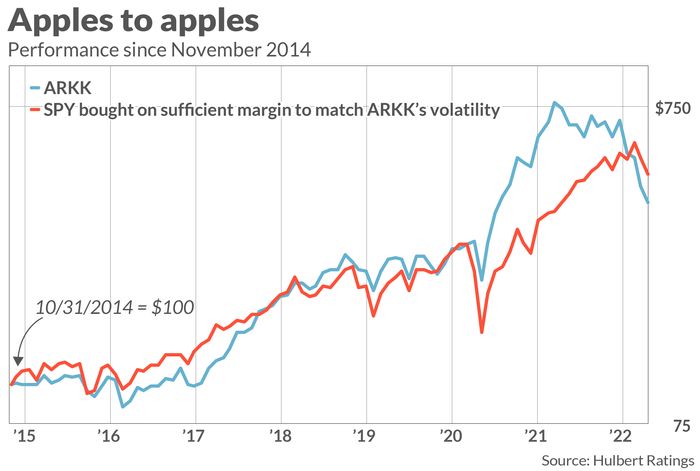 The chart above shows what I found upon applying the professors’ approach. A hypothetical portfolio that bought the SPDR S&P 500 Trust with sufficient margin to match ARKK’s volatility would have beaten ARKK by 3.8 annualized percentage points since October 2014. So, according to the test devised by Professors Graham and Harvey, ARK Innovation did not beat the market.

For the record, I should emphasize that I could have chosen various sub-periods over the past seven years in which the ARK Innovation ETF would have passed the Graham-Harvey test. The same is true for individual meme stocks. But over longer periods of at least several years it is exceedingly rare to beat the market on a volatility-adjusted basis.

The bottom line? The next time you’re tempted by the spectacular short-term gains of this or that stock or ETF, first try to determine if it would have beaten a hypothetical index fund that is leveraged to match the stock’s or ETF’s volatility. Even if you don’t want to go through all the individual steps to replicate the Graham and Harvey approach, a simple back-of-the-envelope calculation is better than nothing.

To do that, start by estimating the relative volatilities of the S&P 500 and whatever stock or ETF you’re considering. You can eyeball it looking at a price chart that plots both of them side by side. The next step is to estimate what the S&P 500’s return would have been if you had bought it with whatever leverage is needed to make its volatility just as high. Don’t worry about precision when doing a back-of-the-envelope calculation; estimates are better than nothing.

If your estimate of the levered S&P 500’s return comes anywhere close to the return of your stock or ETF, then you have a big warning sign that it may not be as compelling an investment as it appears to be.

Mark Hulbert is a regular contributor to MarketWatch. His Hulbert Ratings tracks investment newsletters that pay a flat fee to be audited. He can be reached at mark@hulbertratings.com.

Also read: Why the stock-market rally may be nothing more than ‘wishful thinking,’ according to Morgan Stanley CIO

Washington Watch: The SEC’s next regulatory target could be index providers

: Should you convert your IRA to a Roth if Biden’s infrastructure plan passes?