What the shell? Apparently, America’s favorite Easter candy is the cream-filled egg that people either love, or love to hate.

Instacart recently conducted a survey of more than 2,000 Americans with The Harris Poll to get a “peep” at the country’s favorite Easter candies. And it found that Cadbury Creme Eggs — the chocolate eggs filled a yellow and white fondant-like filling that resembles a real egg yolk — were dubbed the most popular Easter confection in 24 states; just under half the country. They were particularly popular in Southern states, out West, as well as in Alaska, Hawaii and parts of New England.

To be sure, some 100 million Cadbury Creme Eggs are sold every year, and their seasonal scarcity is part of their appeal. Even Grammy-winning singer Lorde has been vocal about her love for the Cadbury eggs.

And apparently, deep-friend Cadbury Creme Eggs are now a thing.

But they’re a divisive decadence, as they have also landed at the top of least favorite Easter candy lists.

For example: While CandyStore.com, which sells candy in bulk to retailers across the country, didn’t release an Easter candy ranking this year, it ranked Cadbury Creme Eggs as the least popular Easter candy last year. Most complaints centered on what a mess cracking into one of these eggs often makes. Some customers also complained that the quality of the chocolate took a hit after Kraft bought Cadbury in 2010; Cadbury is now a part of Mondelez International’s MDLZ, -0.20% snack food portfolio.

Reese’s Peanut Butter Eggs from Hershey HSY, +0.18% were the second-favorite Easter treat in Instacart’s poll this year. Most of the Midwest, the East Coast and the Mid-Atlantic states — plus Louisiana as the lone Southern Reese’s lover in this survey.

And in fact, Reese’s Mini Peanut Butter Chocolate Eggs topped RetailMeNot’s own Top Easter Candies for 2022 list, with more than a third (35%) of surveyed Americans voting for them — although Cadbury Creme Eggs were close behind in this survey, as well, with 21% of the vote.

Reese’s generally performs well in candy rankings. Reese’s Peanut Butter Cups topped CandyStore.com’s most popular Halloween candies list across the U.S. for 2021. And the chocolate and peanut butter confections were the second-most popular Halloween treat in YouGovAmerica’s polling last fall, coming just behind the Mars-owned M&Ms. In fact, their popularity helped spur Hershey-owned Reese’s to dish out a 3.4-pound version of its signature peanut butter cups as a “pie” last Thanksgiving — and its run of 3,000 pies sold out online in less than two hours (or one hour and 57 minutes, to be exact).

Check out Instacart’s map of the most popular Easter candy by state below. 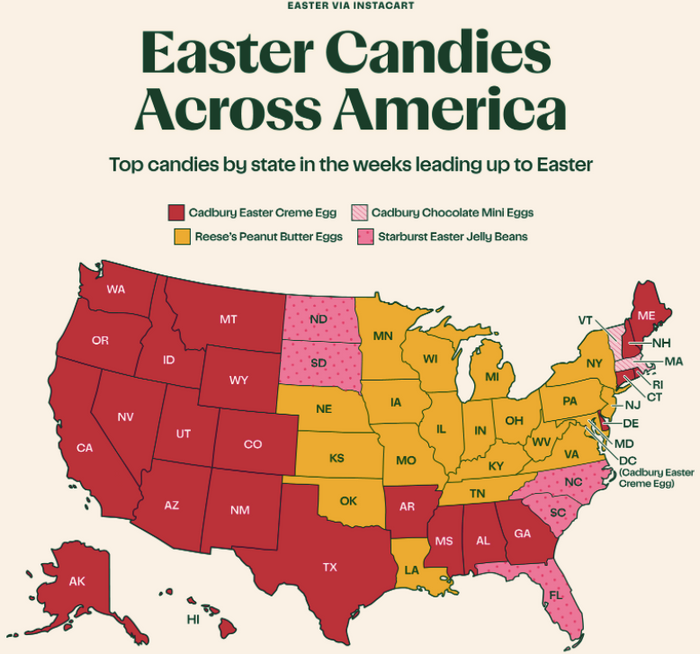 Most popular Easter candies across America.

Noticeably absent: the pink and yellow marshmallow chicks and bunnies from Peeps. The generic “yellow marshmallow chicks” came in at No. 9 on Instacart’s survey. The report noted that a quarter of Americans (25%) said that they eat the spongy marshmallow treats each year for the sake of tradition despite the confections being among their least favorite Easter candies. Ouch. They were also the least favorite Easter candy in RetailMeNot’s poll.

The National Confectioners Association is predicting a sugar rush this Easter, anticipating that candy and confections sales will be 5% to 7% higher than they were last Easter, when sales hit about $ 4 billion. The NCA suspected this is in part due to Easter being a couple of weeks later this year than it was in 2021 (when Easter Sunday was on April 4), which has given consumers more time to do their spring holiday shopping.

The National Retail Federation also anticipates that 80% of consumers will spend money celebrating Easter this year, with total spending (including clothing and gifts, as well as candy) expected to reach $ 20.8 billion. The average adult consumer is expected to shell out just under $ 170 for Easter 2022.

It should be noted that inflation could also be making Easter baskets more expensive this year, as the prices of raw materials like milk, sugar and cocoa — not to mention aluminum, which crafts the foil often used to wrap individual Easter treats — have hopped ever higher. In fact, a New York Post survey suggested that the average cost of an Easter basket has jumped to $ 61.83 this year, which is up from $ 50.46 in 2019, before the pandemic.

But people will still pay up to celebrate Easter. Overall, three-quarters of Americans surveyed by Instacart and The Harris Poll said that they would absolutely or probably buy Easter candy this year, and two-thirds said they even prefer seasonal Easter candy over Halloween candy.

Autotrader: Why the 2021 Hyundai Santa Fe is one of the best cars of the year

The Margin: This Airheads candy chicken sandwich might ruffle some feathers on #NationalFriedChickenDay