I am in my late 60s and need to find another place to retire. I am in the beginning stages of blindness and no longer drive, so am very dependent upon public transport and shopping, particularly grocery shopping, being within walking distance. I presently live in a suburb of a large city, but where drivers are especially aggressive, and with COVID, public transportation has been cut back fairly severely.

I would like to live on the East Coast where there are educational opportunities available for seniors. I would especially like more advanced classes that are available to graduate students. I also would like a large, urban area where there are many cultural activities.

A college town with a good bus system would be OK, but secondary to the urban area. To have a highly walkable city would be very nice. My rental budget is $ 3,000 a month.

I am wedded to the East Coast. Public transportation in the middle of America is pretty wretched, and the West Coast doesn’t suit me.

I have lived in everything from 400-square-foot studios to 1000-sq-foot apartments. Somewhere in the middle would be fine.

Any suggestions would be greatly appreciated.

So many people want walkable towns, and it’s a shame they aren’t more plentiful. You need to look in older communities, built before the era of suburban sprawl, and in what’s known as streetcar towns – where the old streetcars and trolley lines once ran. Even then, walkability to grocery stores will still depend on where you live.

If your heart is set on a large urban area on the East Coast, what you need most might be a public transit map that shows the connections to where you want to go.

But it seems the more decisive question is whether you can take the graduate-student classes you want – and what that will cost. State universities often have programs that let older residents audit certain classes for free. That’s not a given at private institutions. Columbia University, for example, charges those 65 and older $ 750 per course. At Princeton University, it’s $ 200 per course.

Note the restrictions go beyond which courses are even available: you may not be able to participate in classroom discussions, and there’s no contacting professors directly allowed at Princeton, for example.

So my advice is to first decide on the classes you want to take and then approach the university about its rules. That will narrow your list of possible locations rather quickly. You may find you need to actually apply for graduate school. Or you may have to settle for upper-level undergraduate classes.

Other programs tailored to older students interested in the joy of learning, not a degree, might give you much of what you seek as well as more interaction. Have you explored the various Osher Lifelong Learning Institute programs? (You can screen for participating institutions with MarketWatch’s “Where Should I Retire?” tool.)

And I assume you’ve already considered online courses, many of which are free.

I do have some other bad news: the East Coast is full of aggressive drivers. You won’t escape them moving into a city.

I’m sorry you’re so dead-set against the Midwest; I’d point you to a town with a large state university, both for the auditing opportunities as well as the cultural activities. And you’d likely find a good bus system too.

For example, college students ride the bus for free in both Bloomington, Ind.,(Indiana University and suggested here) and West Lafayette, Ind., (Purdue University), so the network has many routes connecting campus and the rest of the community. And a reduced-fare ride for seniors is just 50 cents on both.

And I’m not even going to get into Chicago with its transit system and of course neighborhood supermarkets and other stores.

On the other hand, you’ve got a generous rental budget and a willingness to live in a small space if needed. Here are three suggestions on the East Coast to get you started. 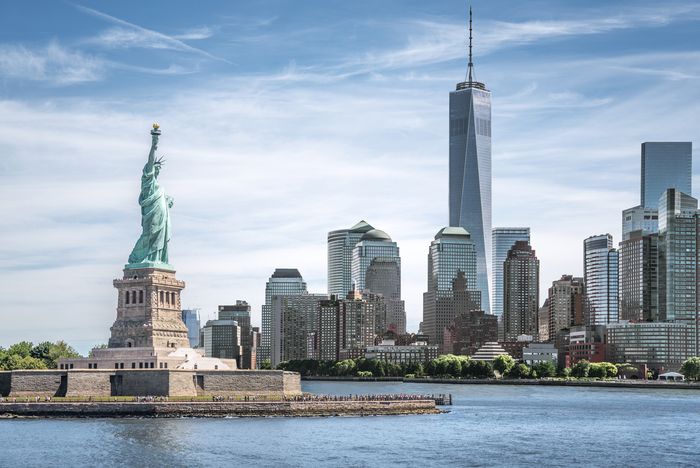 I can’t ignore the U.S.’s biggest urban area – 19 million people across the tri-state New York metro area, and about 8.8 million of them live within New York City. The best place to search for apartments is on StreetEasy. Set your budget, look by neighborhood; there are many ways to narrow your search.

Why not start with the Inwood neighborhood in northern Manhattan? It’s more affordable than other parts of the borough, and the subway’s A train will get you to Midtown and Broadway theater in 30 minutes. The 1 subway line gets you to Columbia and Lincoln Center. Hop the bus across the Harlem River and just into the Bronx when you want to go to Target or Marshall’s. Even in such a big city you’ll find a neighborhood senior center.

If you want more ways to audit college courses, check out Hunter College and Brooklyn College, both part of the City University of New York system.

A culture tip: get a TDF membership for great discounts on Broadway, off-Broadway and off-off-Broadway shows. And you can get free or discounted one-year membership to a number of museums using your free New York City ID card. 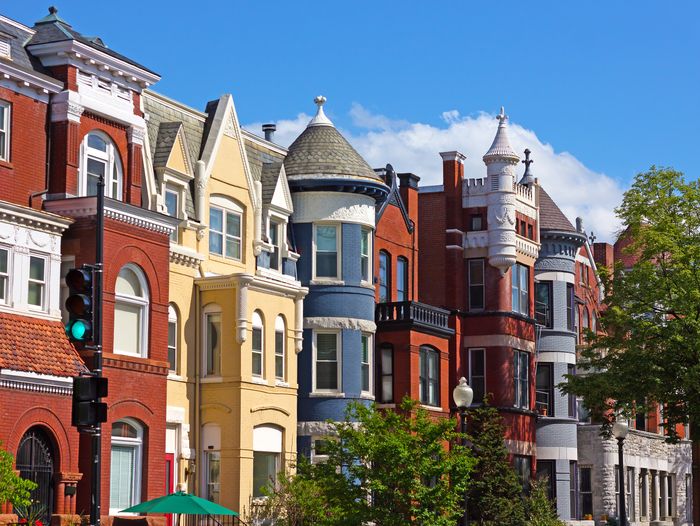 Some of the fancier row houses near DuPont Circle in Washington, D.C.

You’ll be spoiled for choice for cultural opportunities in our nation’s capital, and they’re generally more budget-friendly than in New York City. Start with the Smithsonian’s many museums and their classes, lectures and tours. Among the Kennedy Center’s many events are some that are low-cost or even free.

I’ve also found you an option for taking graduate-level courses. The University of Maryland allows it for retired state residents 60 and older, though they still must meet the admissions criteria. Tuition will be waived; fees are not. The same group also can apply to audit undergraduate classes.

Among other options for auditing classes, George Mason University in Virginia allows state residents 60 and older to audit up to three classes per semester for free. American University allows those who are at least 55 and live in four nearby ZIP Codes to audit classes, and Georgetown University allows those 65 and older to audit most undergraduate classes, depending on space, for $ 30 per credit hour. A caveat for you is that Georgetown isn’t on the regional subway system, called Metro.

Indeed, where you want to audit classes could determine where you live. Otherwise consider stops along the Orange Line in Arlington and Rosslyn in Northern Virginia; all have vibrant walkable neighborhoods and easy transportation. If you prefer Maryland, look at downtown Silver Spring. And for more of an urban feel, consider the DuPont, U Street, Shaw or NoMa neighborhoods in the District.

Here’s what’s for rent in Washington, D.C. right now, using listings on Realtor.com (It, like MarketWatch, is owned by News Corp.) 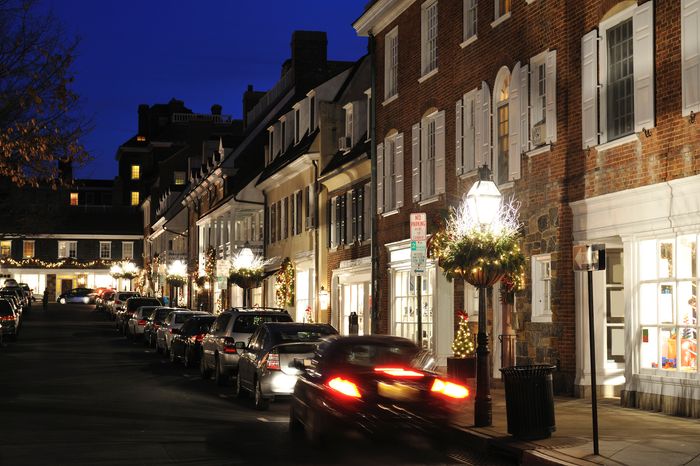 This is my wild-card suggestion. True, it’s not a big city; just under 31,000 people live here. And it’s got its share of pricey rents. But you have a college town with courses you can audit, as I flagged above, many cultural events tied to the university, highly regarded McCarter Theater (with more than just theater) as well as an excellent local library with many events of its own. Of course there’s a senior center too.

For transportation, use the university’s free Tiger Transit bus service that goes to some supermarkets, other bus lines as well as train service to New York and Philadelphia (suggested here), using the shuttle train service to the Princeton Junction station (also served by Amtrak).

You can also take a 15-minute ride on New Jersey Transit from Princeton Junction to New Brunswick and Rutgers University, where state residents over 62 can audit classes for free.

Here’s what’s on the market, using listings on Realtor.com.

I’ve flagged many other college towns in other articles. Within North Carolina’s Research Triangle area, focus on Raleigh (better transportation than neighboring Durham, those 65 and older can audit courses for free at North Carolina State University, and NC State also hosts an OLLI program). Richmond, referenced here, is another option (audit classes at Virginia Commonwealth University).

Where should Deborah move? Leave your suggestions in the comments section.

I want to move to a walkable, historic, four-season town and have a budget of $ 30,000 a year — where should I retire?

We want to retire in the Carolinas or Virginias in a walkable town neither too large nor too small — where should we go?

We want to retire to a place with lots of cultural activities, a beach and a major airport. Our budget is $ 4,000-$ 5,500 a month, including rent — so where should we look?

We want moderate weather and live within an hour of the mountains and less than three hours to the beach — where should we retire?

The Moneyist: ‘We don’t have any children’: My family owns land that has been in our family for 100 years. I would like to leave this land to my wife. But what if she remarries?