The Nifty remained under pressure throughout the session on April 11, weighed down by weak global cues and caution ahead of IT major TCS’ numbers that would ring in the earnings season.

As the index closed lower than the opening level, it formed a bearish candlestick on the daily charts.

“As technical trends are mixed at this point in time, indices may be bound to remain volatile going forward. However, as long as bulls are able to defend 17,600 levels, the Nifty shall remain sideways with a positive bias. In that scenario, the strength shall initially extend towards 18,100 levels,” Mazhar Mohammad, Founder & Chief Market Strategist at Chartviewindia said.

If the index breaches 17,600 on a closing basis, it will pave the way for more weakness and the downswing can extend into 17,400– 17,350, where some meaningful support exists, he said.

For the time, it would be prudent to remain neutral, while long index positions should be held with a stop-loss below 17,600, Mohammad said.

India VIX, the fear index inched up 3.29 percent to close at 18.27 levels, which is still a comfortable level and is attracting buying interest on declines and holding the index at support zones, experts said.

The options data indicated that the Nifty could see a wider trading range of 17,400-18,000 in the coming sessions.

The Bank Nifty opened negative at 37,592 and drifted towards 37,500 in the morning trade. It managed to hold the immediate support zone with the formation of higher lows of the last two sessions and bounced towards 37,950. 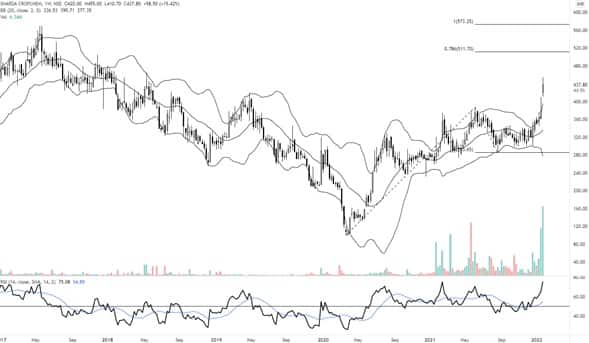 Trade Spotlight | What should you do with Sharda Cropchem, Bandhan Bank, Lupin, Cipla, Global Education?