Now that the Federal Reserve has started to raise interest rates to counter inflation, this is a good time to take a deep look at the S&P Dividend Aristocrats and isolate stocks with the highest yields. There are more aristocrats than you might expect, with three broad U.S. indexes maintained by S&P Global.

Below is a screen of all three of the indexes to list the 10 U.S. Dividend Aristocrats with the highest yields.

On March 16, the Federal Open Market Committee released its policy statement following a two-day meeting and said the target range for the federal funds rate would increase to 0.25% to 0.50% from its previous range of zero to 0.25%.

The Federal Reserve Board and FOMC also released a set of economic projections, which included an estimated gross domestic product growth rate for 2022 of 2.8%, which was down from the previous 4% estimate in December.

During a press conference following the release of the FOMC statement, Federal Reserve Chairman Jerome Powell said the committee had “made progress” on a plan to reduce the central bank’s balance sheet, which had ballooned during the coronavirus pandemic as the Fed made extraordinary purchases of government bonds and mortgage-backed securities, to increase the money supply and support the economy.

Powell said the FOMC would release details of that plan soon. Shrinking the balance sheet would reduce demand for bonds, possibly pushing long-term interest rates higher. As bond prices have declined, the yield on 10-year U.S. Treasury notes TMUBMUSD10Y, 2.112% has increased to about 2.23% from 1.51% at the end of 2021.

In line with the Fed’s prediction of slower economic growth, Jonathan Burton interviewed David Rosenberg, who predicts a recession this summer.

Starting with the benchmark S&P 500 SPX, +2.24% Index, the S&P 500 Dividend Aristocrats Index SP50DIV, -0.08% is made up of companies that have increased their regular dividends on common shares for at least 25 consecutive years. That’s the only criterion for inclusion as an Aristocrat — it makes no differences how high the dividend yield might be.

The index is equal-weighted, rebalanced quarterly and reconstituted annually. It is tracked by the $ 9.6 billion ProShares S&P 500 Dividend Aristocrats ETF NOBL, +0.83%, which was established in 2013.

The idea of the Aristocrats isn’t that the stocks will necessarily generate high income for investors. It is that the consistency of dividend increases might signal a commitment by companies’ management teams to their shareholders and be an indicator for good performance over the long term. A commitment to continually raising the dividend might also provide comfort that a dividend won’t be cut — an action that is typically brutal for the share price as investors lose confidence.

A 15-year chart shows that S&P 500 Dividend Aristocrat have performed well against the full S&P 500: 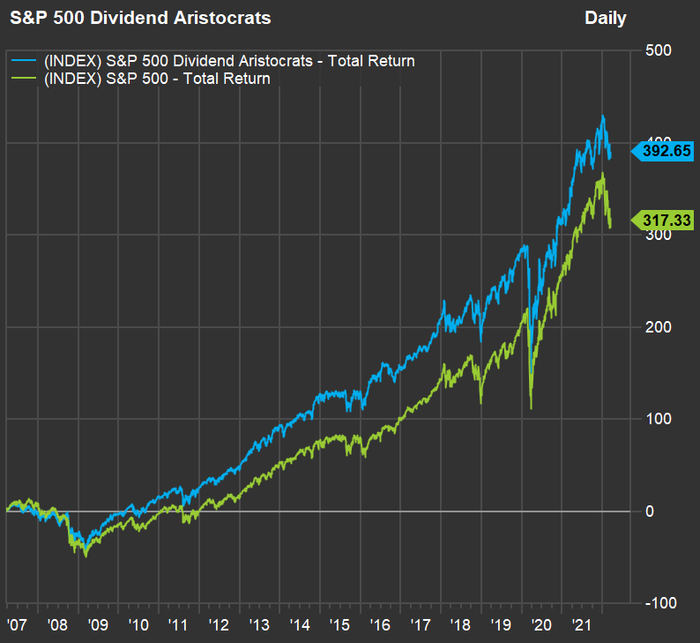 To be sure, the Aristocrats haven’t outperformed for all periods. They lagged during the long bull market through 2021. Then again, they have fared better during the decline of 2022. Here’s a look at this year’s performance and average annual returns for various periods (all through March 15), with dividends reinvested:

Expanding the pool of Dividend Aristocrats

So there are three broad U.S. indexes of Dividend Aristocrats, with varying criteria. Then again, they are all labeled as Aristocrats, so we screened the entire group by listing all the component stocks and removing duplicates, for a pool of 135 companies.

From the full list of 135 companies in the three broad U.S. indexes of Dividend Aristocrat stocks, here are the 10 with the highest dividend yields:

Click on the tickers for more about each company.

Click here Tomi Kilgore’s detailed guide to the wealth of information available for free on the MarketWatch quote page.

Don’t miss: The 8 worst-performing S&P 500 stocks with the highest ratings are expected to rebound by more than 50% over the next year

Deep Dive: These 10 stocks have fallen at least 20% this year, but are expected to soar up to 66% from here

Dispatches from a Pandemic: Meet the vaccine bouncers: ‘If our options are a complete lockdown or asking people to flash their card — I prefer the flashing of the card’