Workers are walking off the job — and finding a better one.

Some 4.3 million people quit their job for another in January in a pandemic-era phenomenon that’s become known as “The Great Resignation.” Quits peaked at 4.5 million in November. Before COVID-19, that figure averaged at fewer than 3 million quits per month.

Workers say low pay and a lack of opportunities for advancement (63% respectively) and feeling disrespected at work (57%) are the three biggest reasons why they quit their jobs last year, according to a survey of more than 9,000 people by the Pew Research Center, a think tank based in Washington, D.C.

“Roughly half say child-care issues were a reason they quit a job (48% among those with a child younger than 18 in the household),” Pew said. “A similar share point to a lack of flexibility to choose when they put in their hours (45%) or not having good benefits such as health insurance and paid time off (43%).”

“Pressures have intensified for people to work more hours and/or for better wages with inflation now at a 40-year high.”

Pressures have intensified for people to work more hours and/or for better wages with inflation now at a 40-year high as COVID-related stimulus programs wind down. Meanwhile, credit-card debt and interest rates are on the rise, and two years of an uncertain and unsteady work environment has taken a toll on people’s savings.

The good news: More than half of workers who switched jobs say that they’re now earning more money (56%), have more opportunities for advancement, have an easier time balancing work and family responsibilities, and have more flexibility to choose when they put in their work hours, Pew said. 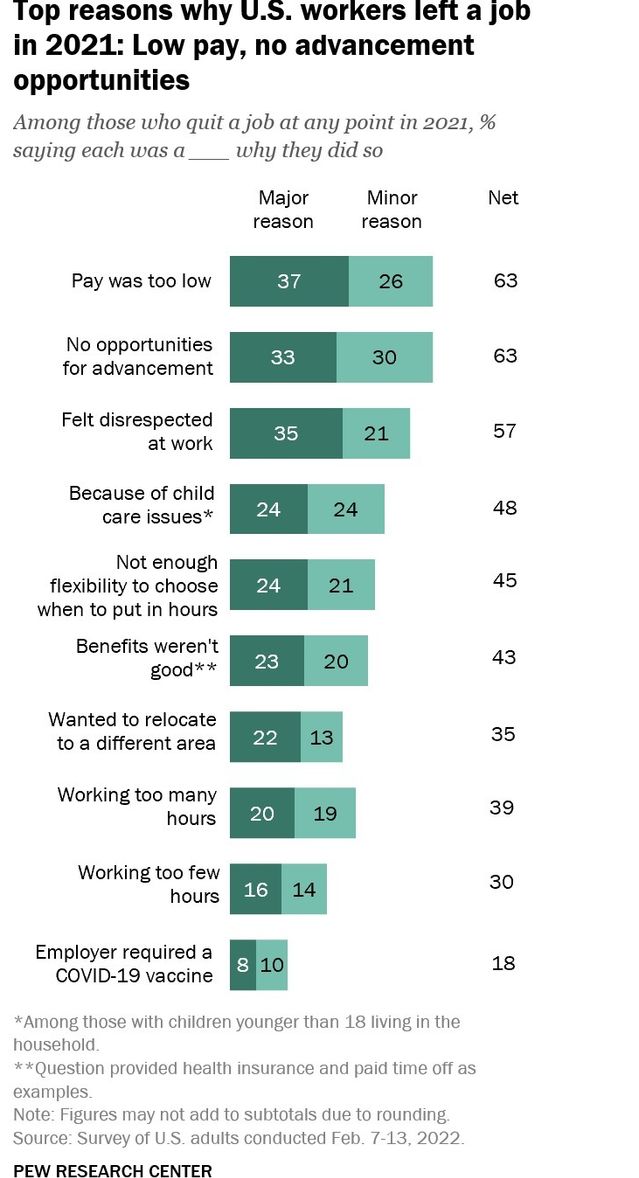 Still, workers with “high social proximity” to customers and/or coworkers have also shown a willingness to work fewer hours, echoing previous research and highlighting the gap between people who are able to work from home without occupational exposure to COVID-19 and those who can’t, separate research found.

Jobs with the highest “effective social proximity” include healthcare professionals, food-preparation workers, and people working in production, construction, transportation and personal-care services, that research, by economists at the Federal Reserve Bank of Chicago and University of Texas at Austin, concluded.

However, when asked whether their reasons for quitting a job were related to COVID-19, over 30% of those in the Pew survey said yes. “Those without a four-year college degree (34%) are more likely than those with a bachelor’s degree or more education (21%) to say the pandemic played a role in their decision,” it added.

In an effort to cast more light on worker sentiment, Gallup asked more than 13,000 U.S. employees what was most important to them when deciding whether to accept a new job. Respondents listed six factors, said Ben Wigert, the director of research and strategy for Gallup’s workplace management practice.

A significant rise in income or benefits was the No. 1 reason, followed by greater work-life balance and better personal well-being, the ability to do what they do best, greater stability and job security, COVID-19 vaccination policies that align with their beliefs, and the organization’s diversity and inclusivity of all types of people.

The Margin: Where to watch the Super Flower Blood Moon total lunar eclipse this weekend

Outside the Box: The GameStop saga is a road map for the Kremlin and other enemies of America — here’s why