With the war on Ukraine coming on top of a global inflationary surge, the retail price of gasoline in the United States has soared by 80 cents a gallon since the beginning of the year to an all-time record of $ 4.17 per gallon, we are told. This statistic is true, but trivial.

People who believe gasoline prices have never been so high are suffering from what economists call “the money illusion.” Simply put, this means our brains are fooling us into thinking we’ve never had it so bad, when actually the cost of driving a mile in your gas-powered vehicle is now lower than it was for most of the past century.

Yes, prices are up, but so are our incomes. And cars are much more efficient now than they were even 10 years ago. 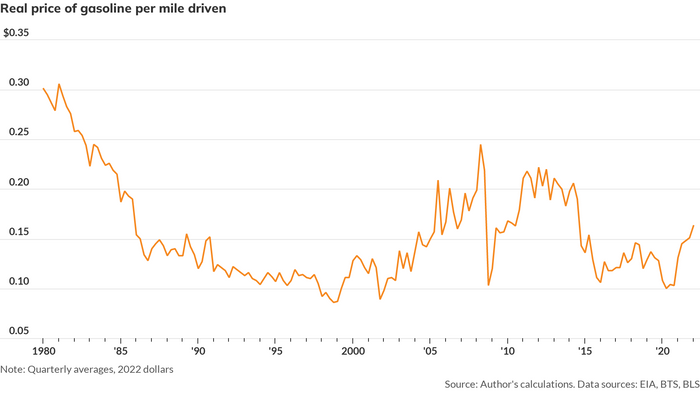 The real price of gasoline per mile driven is nowhere near a record.

Once you adjust for the purchasing power of a dollar and the increased gas mileage of the cars and trucks on the road, you’ll recognize that — even with the huge price increases in just the past few weeks — gasoline prices RB00, -1.69% aren’t so high that they’ll crush the economy.

It’s like your smug granddad lecturing you about how a candy bar “ought” to cost a nickel, just as it did back in the day. But everyone knows a nickel isn’t worth what it used to be and we should start acting like we know it.

In 1980, gas mileage was so awful that driving a mile cost 30 cents for gas (in today’s dollars). Today — if your vehicle gets the national average of about 23 miles per gallon — driving a mile costs about 16 cents for the gas. And if gasoline goes to $ 4.50 as some analysts predict, the cost will be a bit under 20 cents a mile.

For most of the years between 1923 and 1980, gasoline cost about 25 cents a mile (in 2022 dollars).Gas prices weren’t so high during those years that they prevented people from enthusiastically embracing automobiles. That’s when the car completely transformed the American way of life.

Which means gas prices aren’t so high now that they’ll cripple our economy. Yes, they are higher than they were a year ago, but they’ve been much higher before. The economy managed to grow in the early 1980s and the early 2010s (not to mention the 1920s, the 1940s, 1950s and 1960s) when the cost of gas per mile was higher.

Wheat isn’t at a record, either

And, by the way, the same logic applies to the price of wheat. What really matters is the nutritional value of the wheat and how long you’d have to work to earn enough to buy it. 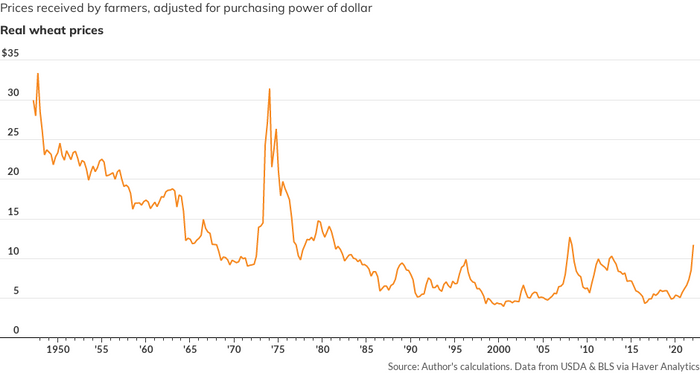 The real price of wheat has been trending lower until recent months.

More on the money illusion:

Breathlessly breaking news: ‘Americans have never seen gasoline prices this high—nor have we seen the pace of increases so fast and furious’: Gas tops $ 4 a gallon

: How to retire well — even if you’re not rich

Where Should I Retire?: I want year-round outdoor living — dry summers and no snow — on $4,000 a month. Where should I retire?