The Nifty50 plunged 3 percent in the biggest single-day fall since April 12, 2021, as bears dominated Dalal Street for the second consecutive session, which saw the index breach the psychological support level of 17,000 on February 14.

Weak global cues amid tensions between Ukraine and Russia and rising oil prices dampened the market sentiment and experts don’t rule out the index falling to 16,410, the swing low touched on December 20, in the coming sessions before resuming the uptrend.

The index formed a large bearish candle on the daily charts as the closing was lower than the opening level.

The volatility also spiked to 22.98, the highest closing level since May 2021, up 23 percent from 18.68 levels on February 11, which indicates wild swings going ahead.

Also read: Gainers & Losers: 5 stocks that moved the most on February 14

“Nifty50 seems to have resumed its downtrend with a huge gap-down opening, which not only sustained throughout the session but also damaged the index by 3 percent. Moreover, with an intraday low of 16,809 levels, this counter erased all the gains registered between January 25 and February 2, from the lows of 16,836 to 17,794 levels,” said Mazhar Mohammad, Founder & Chief Market Strategist at Chartviewindia.

It is just a matter of time before the Nifty breached the corrective swing low of the ongoing intermediate downtrend placed at around 16,410, he said.

As the single session selling is overdone, a pullback attempt is likely in the next one or two sessions, which will remain vulnerable to a selloff, especially when bulls make an attempt to enter into the large bearish gap zone of 17,099 and 17,303 registered on February 14, Mohammad said.

For the time, traders should remain neutral on the index for the day.

With the correction, the trading range indicated by the options data shifted lower to 16,500-17,300 for the coming days.

All banking stocks remained under pressure and closed with 3-7 percent down. The index plunged 1,608.65 points, or 4 percent, to 36,908.60 and formed a bearish candle on the daily scale.

“The index has been making lower high – lower lows from the last two sessions. Now, till it holds below 37,250, weakness could be seen towards 36,500 and 36,250 whereas on the upside, hurdles are visible at 37,500 and 37,800 levels,” said Chandan Taparia, Vice President | Analyst-Derivatives at Motilal Oswal Financial Services.

On the stock front, a bullish setup was seen in ONGC and TCS, he said. 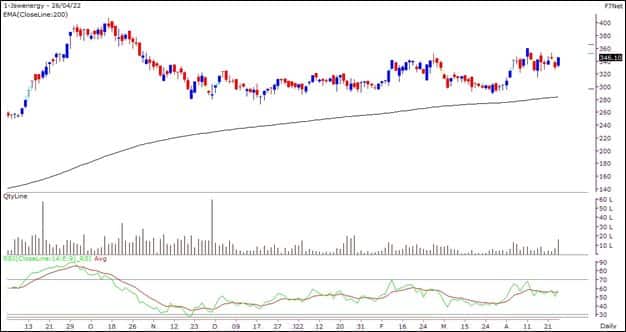 Trade Spotlight | What should investors do with Sterlite Tech, Schneider Electric, and United Breweries on Monday?