Shares of Blue Apron Holdings Inc. suffered the biggest selloff in about 17 months on Thursday, after the meal-kit company reported a wider loss and revenue that fell, while spending on marketing soared and is expected to increase even more this year.

The stock APRN, -25.00% sank 25.2% in afternoon trading, enough to make it the biggest decliner listed on the New York Stock Exchange. The stock was on track for the biggest one-day percentage decline since it dropped 26.0% on Oct. 29, 2020.

The one analyst that provided estimates to FactSet had projected a per-share loss of 75 cents and revenue of $ 110.0 million.

““While profitability remains a goal over the longer-term, we are focused on taking advantage of an important opportunity to accelerate customer and top-line growth.””

“This past quarter, we significantly ramped up our marketing spend, focusing on targeted investments that are helping to raise brand awareness,” said Chief Executive Linda Findley in prepared remarks for a conference call with analysts.

The company also said higher logistics costs had a more significant impact on results that anticipated.

For 2022, the company said it expects marketing spending to continue to increase through the year, to support expectations for faster revenue growth. Total marketing spend for the year is expected to be “around double” what was spent in 2019, which was $ 48.13 million. That implies 2022 marketing spend of roughly $ 96.3 million, which compares with $ 49.93 million spent in 2021.

CEO Findley said after completing the $ 78 million capital raise in November, she believes the company has the “financial foundation” to be more aggressive with its marketing push.

“While profitability remains a goal over the longer term, we are focused on taking advantage of an important opportunity to accelerate customer and [revenue] growth,” Findley said.

After a rough start to its public life, with the stock losing more than half its value just six months after it started trading in June 2017, the company has been in turnaround mode for years. 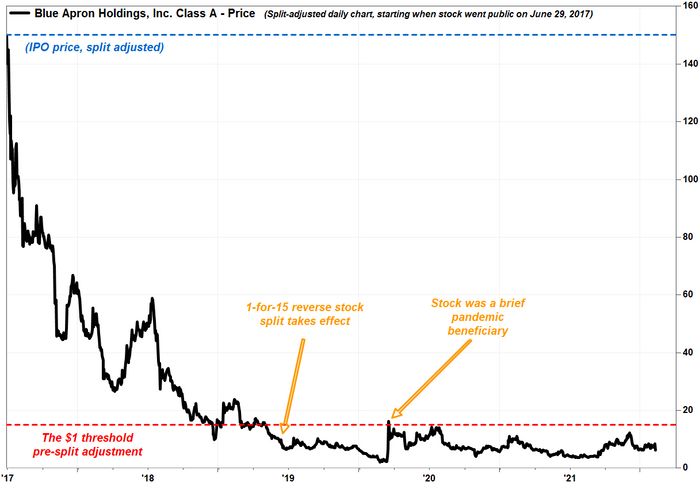 After the stock dropped below the $ 1 threshold, first in late 2018 and again in early 2019, the company named Findley (was Linda Findley Kozlowski at that time) its CEO in April 2019, then implemented a 1-for-15 reverse split in June to lift the stock price and improve trading liquidity.

Although the stock spiked higher in March 2020, as the COVID-19 pandemic sparked Wall Street interest in companies providing stay-at-home products and services, that interest was short lived.

But now, Findley said she believes the company is finally turning a corner.

“We believe we are at a true inflection point in our journey as we continue to turn around our business,” Findley said. “We believe the actions and investments that we are taking in this final stage are putting us in a great position to get back on a path for long-term and sustainable growth.”

: Warren Buffett baffles many on green energy — what about heir apparent Greg Abel?