Hello there! Got volatility? We bet you do as the Federal Reserve signaled on Wednesday that interest rate increases in 2022 are its main priority. There is nothing new there, as investors had expected as many as four rate hikes this year, but the message is being fine-tuned. Fed boss Jerome Powell wanted to emphasize that policy is tightening but it isn’t on a preset course, to borrow phrasing from current Treasury Secretary Janet Yellen, a former Fed chief, which could be interpreted a number of ways. Inflation could get worse and the Fed might need to adjust policy or price pressures might recede in due time.

Is the Fed behind the curve? Is it too hawkish? Those are all questions that might take time to play out, but the key thing for investors to suss out is how and where they should be positioned. And we’ve got some reads on that to share.

Send tips, or feedback, and find me on Twitter at @mdecambre or LinkedIn, as some of you are wont to do, to tell me what we need to be covering.

Read: What is an ETF? We’ll explain.

Visual of the week

Wednesday’s post-Federal Reserve decision action was notably bad for these ETFs, according to Instinet’s Frank Cappelleri: “While some of the ETFs and indices we track logged noticeably bad one-day declines, the intra-day sell-offs tell the full story. 22 dropped more than 4% from their highs” on Wednesday, he wrote. 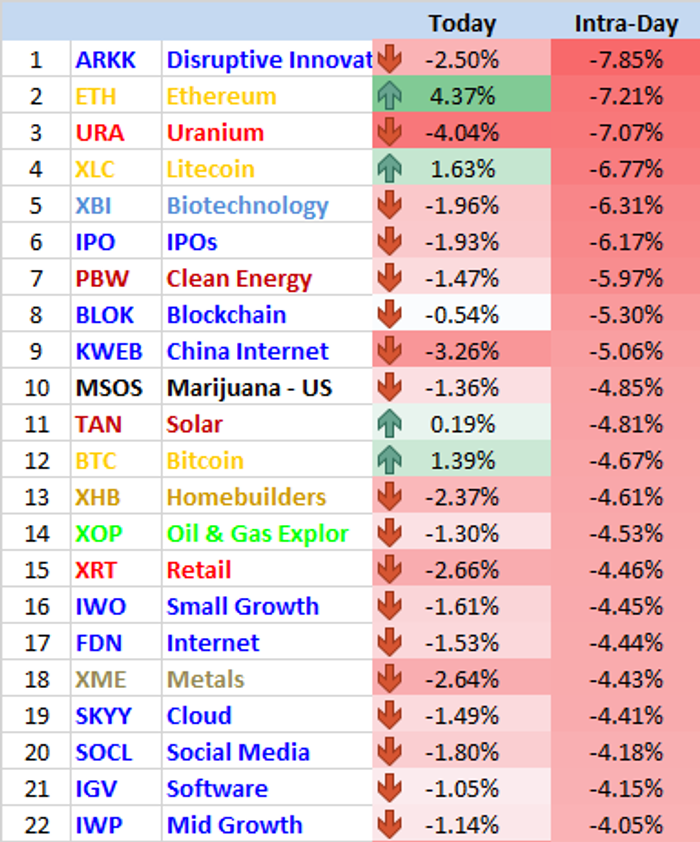 Some strategists have been pointing to the benefits of venturing outside of the U.S. for returns during this fallow period in domestic assets and the performance of international ETFs point to areas that are, indeed, outperforming handily so far in 2022. 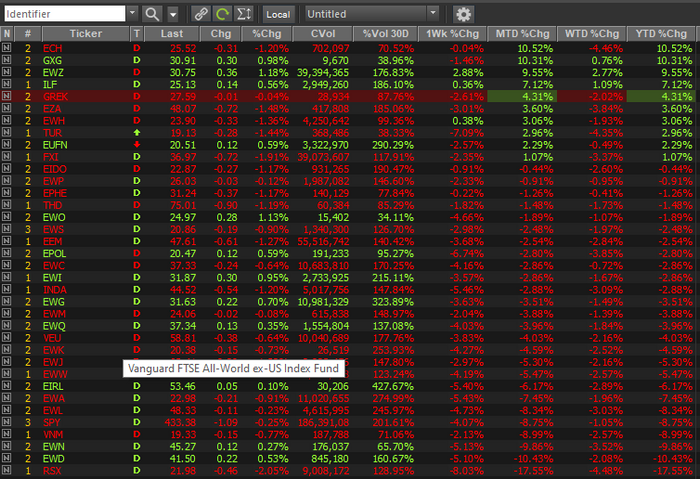 We caught up with Zoe Barry, who founded nascent trading platform Zingeroo, and she had some interested insights about younger investors. Zingeroo, is a growing trading platform that caters to investors in their 20s and 30s, but also has a range of users, and allows traders to benchmark their performance, not against the S&P 500 SPX, +2.43% or the Russell 2000 RUT, +1.93% but against one another.

Barry says that younger investors aren’t panicking amid this market downtrend and note that investors had been loading up on ETFs that are short big technology stocks, which they rightly believed would suffer as bond yields rose, putting pressure on interest rate-sensitive areas of the market.

She said two of the more popular trades were ProShares UltraPro Short QQQ, which is up 46.4% so far this year, compared with the Invesco QQQ Trust, which is down 12.8% so far in 2022.

“They realize that the market is shifting,” Barry said of younger investors.

She said, however, that it isn’t clear that these investors are operating with tactical efficiency in the way that so-called pros might.

According to Peng Cheng, a markets strategist at JPMorgan, retail investors aggressively dumped stocks at the beginning of Monday. And by noon, there was a retail order imbalance of $ 1.36 billion, dumping companies such as chip makers Nvidia Corp. NVDA, +4.08% and Advanced Micro Devices AMD, +2.57%, as well as tech conglomerates like Microsoft Corp. MSFT, +2.81%. Meanwhile, hedge funds and mutual funds—were net buyers of $ 5.8 billion.

The report showed that retail investors did re-enter the market in big numbers that same day as things improved.

Barry said that the differences in the younger investor is that they tend to operate more as a collective and crowdsource ideas via social-media communities, including on Zingeroo, and sites like Reddit and Discord.

“They’re actively talking about what to do and no longer shooting from the hip,” Barry said.

Todd Rosenbluth, head of mutual fund and ETF research at CFRA, told ETF Wrap that investors are also loading up on value-oriented sectors, which we touched on last week.

What are folks avoiding?

He said he has also seen a shift away from growth funds like the QQQs, referring to the popular Invesco fund and the iShares Russell 1000 Growth ETF IWF, +3.52%.

He said long-term investors willing to ride this wave of volatility also “have continued to turn to low-cost diversified options such as Vanguard Total Stock Market ETF VTI, +2.46% and SPDR Gold Shares GLD, -0.30%. VTI, referring to the Vanguard ticker symbol, is down 5.2% on the year but up 1.7% over the past 12 months, while the gold ETF is down 1.9% in 2022 thus far and off 2.8% over the past year period.

Dave Nadig, director of research and CIO at ETF Trends, ETF Database, told ETF Wrap that ETFs may be keeping on a floor on this market based on the trading action he has seen. “ETF investors are the ones buying the dips,” he said.

He said that the volume in any given ETFs has tended to rise on the upticks, which is one sign that ETF investors are serving as buyers.