J.P. Morgan’s Anmuth cut his price target by nearly 30%, to $ 50 from $ 70, saying traffic declines in December and higher-than-normal promotional activity suggests “soft near-term demand and uncertainty” into the second half of fiscal 2022.

Meanwhile, Anmuth reiterated the overweight rating he’s had on the stock since October 2019, which was just after Peloton went public, as his new price target still implies 47% upside from current levels.

He said that Peloton faces “multiple near-term headwinds” as it tries to distance itself from “pandemic pull-forward” of subscribers, re-establish traffic, reduce its cost structure and shift to more variable components.

However, valuations remain attractive as the stock has “fully reversed the share price benefits of pandemic-driven demand” even as subscribers have been pulled forward by more than a year, and fiscal 2022 subscribers are likely to be more than 50% higher than expected two years ago. 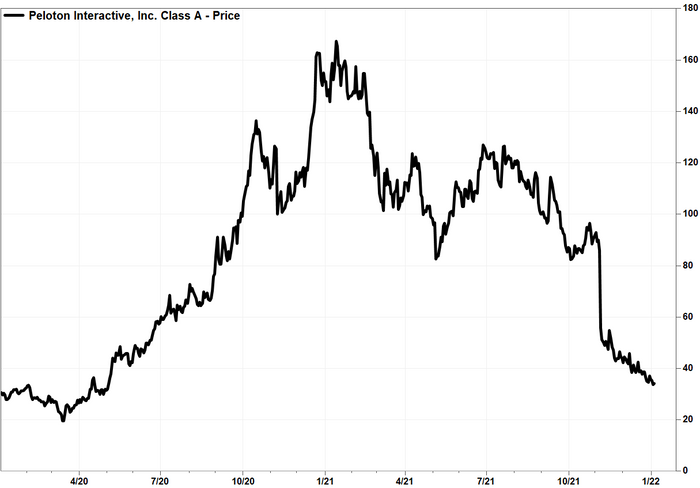 “We continue to believe considerable headroom remains in the [long-term] connected fitness opportunity across Bike & Tread, and [Peloton] should drive additional growth through commercial and international expansion,” Anmuth wrote in a note to clients.

Also read: Peloton stock is a buy, but with an ‘asterisk,’ analyst says.

The stock had recovered to pre-pandemic levels in April, then started the “pandemic-driven” rocket ride in early May.