U.S. small-cap stocks will probably underperform the S&P 500 index in 2022, according to DataTrek Research.

“Our reasoning is straightforward,” wrote DataTrek co-founder Nicholas Colas in a note Thursday. “This asset class needs the tailwind of lower US corporate high yield spreads over Treasuries to outperform large caps, but spreads are already at/near their historical lows.”

About a third of the Russell 2000 index RUT, a gauge of U.S. small-cap stocks, is unprofitable and “these companies need ready access to cheap capital,” according to Colas. High-yield debt spreads “are a proxy for the availability and cost of that capital,” he said in the note.

Read: Easy money in junk debt markets helps borrowers, but are investors risking too much in a reach for yield?

In the U.S. junk-bond market, high-yield spreads were 303 basis points over comparable Treasurys on Dec. 29, according to a chart on the website of the Federal Reserve Bank of St. Louis, which cites Ice Data Indices as its source.

Could high-yield spreads fall to lows seen in 1997 and 2007? wrote Colas. “Maybe, but we don’t think markets will pay much for that move to all time record lows since history so clearly says they are unsustainable.”

“Without the catalyst of lower high yield corporate spreads,” said Colas, “it is hard to like the Russell over the S&P 500.”

The S&P 500 notched its 70th record high Wednesday, scoring an unusually long series of all-time peaks this year. That’s the most since 1995, when the S&P 500 logged 77 record closes, according to Dow Jones Market Data.

Next year probably won’t be bad for the S&P 500, according to the DataTrek note.

“Looking back at annual S&P 500 returns since 1928, we find that really bad years (down more than 10 percent) are rarely preceded by really good years (such as the +28 pct we’ve had in 2021),” Colas wrote. The exceptions were in 1937 and 1973, which saw double-digit percentage drops after really strong S&P 500 gains the year before, the note shows. 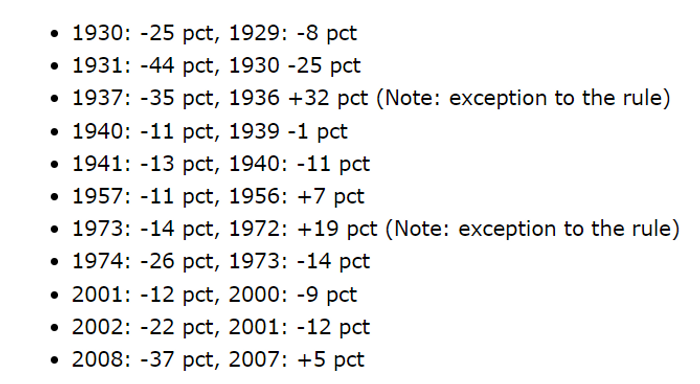 Read: ‘Proceed with caution’: here’s what Wall Street analysts see for the U.S. stock market in 2022

Kelley Blue Book: The 11 best features of the Hummer EV