While 2021 was a record-breaking year for initial public offerings, with 1,000 deals for the first time in history, a slowdown toward the end of the year and woeful performance by Wall Street’s rookies could portend a return to normalcy in 2022.

Even with a star-studded lineup of private companies, such as Instacart and Reddit, that seem ripe for public debuts, the 2022 IPO market may have trouble matching 2021’s pace of deal activity given a cooling of once-hot IPO trends like special-purpose acquisition companies, or SPACs, and U.S. listings for Chinese companies. There is also the potential for rising interest rates, which could impact how high-growth technology stocks are valued by investors.

Overall, 2021 marked the strongest year for IPO listings and volumes in history, with the barrier of 1,000 offerings being hit in the last month of the year, according to Dealogic data, which showed a record $ 315 billion raised when that total had never before hit $ 200 billion in a year. More than half of those deals were SPACs, as 606 blank-check companies went public in 2021, with most of them heavily frontloaded into the beginning of the year — 298 of the SPACs that went public were in the first quarter of 2021, according to Dealogic. 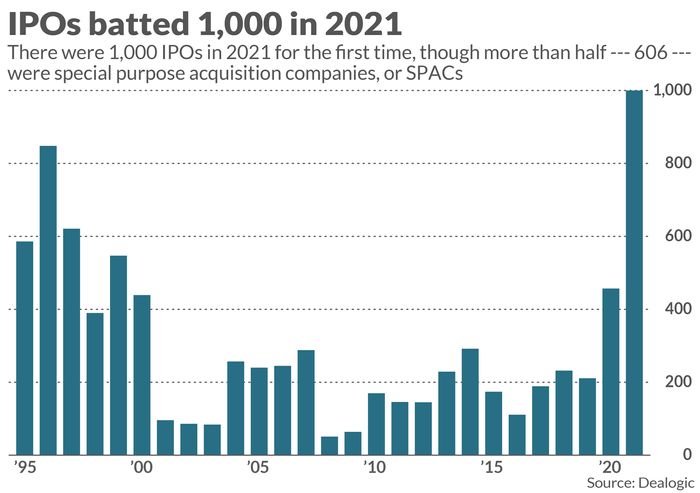 SPAC issuance slowed as the year wore on, and many SPACs that did go public had trouble finding suitable targets or merged with businesses arguably too immature for the public markets. That contributed to a decline in SPAC issuance throughout the year, and leaves experts wondering about the year ahead.

“I think we’re going to see a big pullback in SPACs in 2022,” said Greg Martin, the managing director of Rainmaker Securities, which runs a platform that allows for the trading of private-market securities. He predicts a “return to sanity” as the market reevaluates the appropriate use cases for SPACs.

The IPOs to expect in 2022: Reddit, Instacart and others could hit Wall Street

Many SPAC deals come with a private investment in public equity, or PIPE, which allows the company to raise additional funds. But “getting the PIPEs done for the SPAC market has been a bit challenging in the second half of this year,” said Previn Waas, a partner at Deloitte who focuses on the IPO market. “That will continue to be a theme in the first part of next year.”

While SPAC issuance is down, the market is admittedly “far from dead,” in the view of Jay Ritter, a University of Florida finance professor. There have been about 125 SPAC IPOs since the beginning of October, which doesn’t match the first-quarter pace of roughly 100 a month but still represents an increase relative to summer trends, he noted.

The China pipeline dried up

The market will also have to contend with heightened tensions between the U.S. and China that have dampened a key source of listings from overseas companies.

Chinese ride-hailing giant Didi Global Inc. DIDI, +2.37%, which held one of the largest IPOs of the year back in June, recently announced plans to delist from the New York Stock Exchange amid pushback from the Chinese government against local companies that house user data and that have opted to list their shares overseas. The U.S. has also cracked down on the reporting practices of Chinese entities that list their shares on American exchanges.

Of the just over 60 foreign companies that priced IPOs in the U.S. during 2021, 30 were from China, but there haven’t been any since the end of October, according to David Ethridge, the U.S. IPO services leader at PwC. His statistics exclude deals with values below $ 25 million and some other more niche deals.

There’s some historical precedent for a dramatic shift in Chinese IPO activity, per Ethridge, who noted that in 2010 there was a “green light on anything coming from China before it went to red light,” prompting only two Chinese IPOs in 2011.

“As I look to next year, are we going to see that kind of activity coming from a part of the market important for cool tech companies?” Ethridge asked.

Ritter at the University of Florida was more blunt with his assessment: “There’s a good chance we will not see a Chinese IPO in the U.S. in the foreseeable future,” he said.

Where is the pop?

Traditional IPOs could be the star of the show once again as tech and biotech companies look toward the public markets, but the action in 2022 may get off to a choppy start amid macroeconomic concerns about Federal Reserve tapering, rising inflation, and COVID-driven market volatility—as well as more specific worries about the health of the IPO market itself.

“There are hundreds of IPOs lined up to go public so the supply is there, but demand is yet to be determined,” said Renaissance Capital data specialist Avery Spear. “In part it does come down to investor fatigue” after a year with such strong IPO counts, she continued, “but you can’t knock broader market trends.”

Companies eyeing potential IPOs will have to reckon with a disappointing truth: While IPO activity was stronger than ever in 2021, stock performance has been lackluster. Roughly two thirds of the companies that went public through traditional IPOs this year have shares trading below their offer price, according to PwC.

Big names that have declined from their IPO prices include Robinhood Markets Inc. HOOD, +4.99%, Poshmark Inc. POSH, +8.47%, and Bumble Inc. BMBL, +8.46% Shares of Coinbase Global Inc. COIN, +4.05%, which went public through a direct listing, were recently hovering just below the company’s reference price.

Shares of newly public companies aren’t delivering the same pops that investors grew used to in the 2020 market. “You do have to go back a ways to find the most recent deal trading at more than double its offer price,” said Ritter at the University of Florida.

Just 13 of the 441 deals from 2021 listed on IPOScoop.com have stocks trading at more than double their IPO prices.

“For sure there’s a big pipeline… but we need better returns across the board to keep people interested in this asset class,” said PwC’s Ethridge. “I would say it’s a stock picker’s market and you can’t just throw darts.”

The current market may place more of a premium on a company’s profit trajectory, unlike during the frothier conditions of the recent past, according to Santosh Rao, the head of research at Manhattan Venture Partners.

“You need companies that have earnings power and pricing power to withstand this post-pandemic world,” Rao said. Companies pointing to profitability “down the road” may not get traction in the current environment.

Another trend to watch in the year ahead is whether direct listings gain further traction. There were six such listings in 2021, double the 2020 total, according to Renaissance Capital, but this pathway to the public markets still makes up just a sliver of overall IPO activity.

“What was holding some back is companies doing [direct listings] and not doing well,” Spear said. But the eventual warm reception to Palantir Technologies Inc. PLTR, +5.23% shares following that company’s direct listing “instilled more confidence in companies” looking to go that route, she argued.

Companies that have opted for direct listings in recent years typically have strong name recognition, allowing them to garner investor interest without going through the traditional IPO process. But software company Amplitude Inc. AMPL, +5.19% sought to break from the stereotype earlier this year, completing a September direct listing despite Chief Executive Spenser Skates’ acknowledgment that it was “not a well-known company.”

Skates sees his company’s listing as a “huge proof point” for other lesser-known companies to try direct listings, and he’s fielded questions from some that were interested in the process.

“There are amazing features of direct listings including more accurate prices, investors who are more committed to you long term, and that you don’t raise a whole bunch of money you don’t need,” Skates said.

Companies taking the traditional IPO path may be forced to raise an unnecessary amount of funding in the process of diluting their shares, in Skates’ view, and he sees “lots of great options” for companies that want to raise smaller amounts of money by choosing a direct listing.

While Amplitude raised funds shortly before coming public, Skates noted that the Securities and Exchange Commission has laid the groundwork for companies to do a primary capital raise along with the public listing process—if only a company were willing to “go through the work of testing it.”

However the IPO market shakes out in 2022, investors may have to sit back before they can sense a clear picture. Companies seem to be in “wait and see” mode when looking at the first quarter, and even the first half, of the year, according to Waas.

“Based on the companies I’m working with, they seem to be aiming for the second, third, and fourth quarter of next year,” he said, while predicting a stronger second half to 2022.

The timing of macroeconomic events will be all the more important given the traditional IPO cadence, Ethridge suggested. Interest rate turns might be accompanied by a “period of indigestion,” he said, and if the rate changes take place in the second quarter, that would coincide with the part of the year when the IPO market otherwise tends to be most active.

Outside the Box: After the Chauvin verdict, we all must speak up against those who condone racism and police violence