The Nifty yet again had a rangebound activity over the last week with 17,700 on the lower end acting as support and 18,200 on the higher end acting as resistance. Frequent bouts of buying and selling kept option traders on toes throughout the week. For the week passed by, the Nifty fell over 2 percent with open interest (OI) up 7 percent.

BankNifty too was trading under pressure with fall of 2 percent. The 38,000 vicinity acted as a vital support, whereby the index saw minor reversal coming, and ended the week at 38,100.

India VIX, fear gauge, continues to slide southwards with closing at 14.86 down by over 2 percent. Negative divergence in VIX w.r.t. downward price indicates traders are still confident of upward momentum.

Looking at the sentimental indicator, Nifty OI PCR is trading at 0.88 near the support zone. PCR is generally a contrarian indicator. Rise in PCR could see support emerging. Overall data indicates more of put writers over put writers in Nifty.

Moving further to the weekly contribution of sectors to Nifty. Most of the sectoral indices have contributed negative such as IT, private banks, oil, NBFC have collectively contributed nearly -293 in the Nifty’s 340-point loss.

Looking towards the top gainer and loser stocks for the week in the F&O segment. Apollo Hospitals topped by gaining over 19.8 percent, followed by Escorts 13.7 percent, and large cap stock like Maruti 8.3 percent. Whereas, Manappuram has lost over 16 percent, M&M Financial -11 percent and Coal India -8 percent over the week.

Considering the ongoing gyration in the November series, the upcoming monthly expiry could be an approach with a low-risk strategy like Modified Call Butterfly in Nifty. 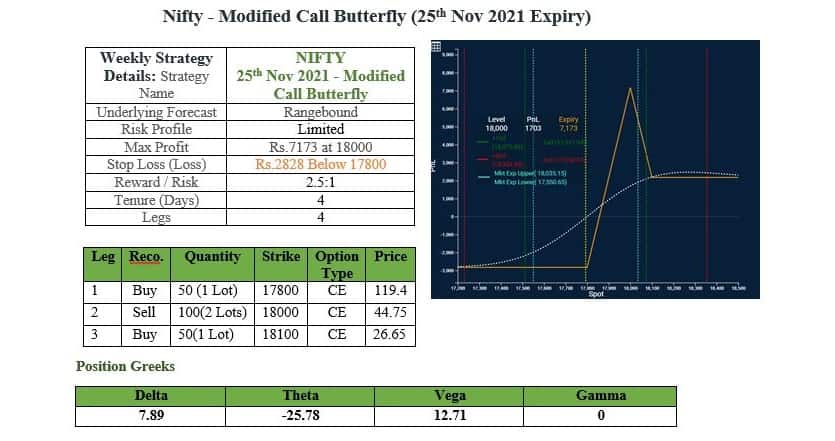 Daily Voice | Two underperforming sectors can turn out to be dark horses in 2022, says Siddhartha Khemka of Motilal Oswal

Edelweiss Financial Services#39; board approves fundraising up to Rs 1,000 crore via NCDs

Bharat Biotech studying if Covaxin shot will work on Omicron