After a great upside move earlier, Nifty gave a halt to its rally last week. The index made another all-time high, but was unable to sustain at the upper levels and crashed vertically to 18,050. The Nifty futures during this week ranged from 18,600-18,050. On the OI (open interest) front, long- unwinding was witnessed in Nifty over the week gone by.

Bank Nifty, on the other hand, continued its rally and made fresh all-time high of 40,582 and closed with spectacular gain of approximately 1,000 points. The broader range was 39,400-40,600. Bank Nifty shut shop with gains of approximately 2.5% last week. On the OI front, long built-up was witnessed in Bank Nifty over the week gone by.

Further diving into the Nifty’s upcoming Weekly expiry, Call writers are showing aggression by building more positions compared to put writers. Nifty’s immediate resistance stands at 18,200 where nearly 66 lakh – highest among all – shares were added, followed by vital resistance at 19,000 with 64 lakh shares.

On the lower side, an immediate support level is at 18,000 where nearly 38 lakh shares were added, followed by 17,500 with addition of 38 lakh shares.

India VIX, fear gauge, increased 12 percent from 15.77 to 17.67 over the week. India VIX is trading near the lowest level of pre-covid crash. Cool-off in the IV has given relaxation to the market. Further, any downticks in India VIX can push the upwards momentum in Nifty.

Looking at the sentimental indicator, Nifty OI PCR for the week has decreased from 1.50 to 0.82. Bank Nifty OIPCR over the week decreased from 1.12 to 1.02 compared to last Friday. Overall data indicates more of call writers over put writers in Nifty.

Considering the bullish momentum, this week can be approached with a low-risk strategy like modified call butterfly in Nifty. 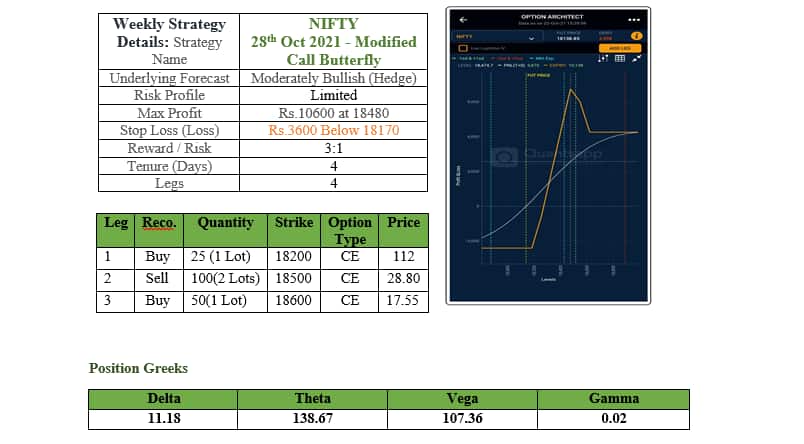 Trend likely to remain weak if Nifty remains below 17,000 mark