The top losers in the IT space include Mindtree, down more than 7 percent, followed by Coforge, L&T Infotech, Mphasis, Infosys, TCS and Wipro

Indian shares were under pressure for the third day on October 21, weighed down by the IT sector that was trading 2 percent lower in the afternoon.

Despite reporting a good set of numbers for the second quarter, IT companies were under pressure amid rich valuations.

“Certain pockets, where valuations have become lofty and have seen frenzied buying in small and midcap indexes, are seeing a correction,” said Saurabh Jain, assistant vice president of research at SMC Global Securities.

“Largely, IT companies have reported a good set of numbers but the valuations are rich in the sector and there is a good amount of room for correction,” he said, citing a Reuters report. 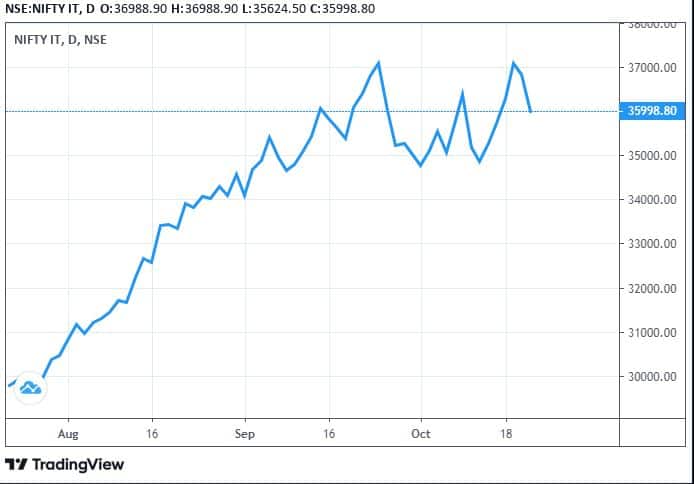 The Nifty IT has returned over 20 percent in the last three months compared to 14 percent gains in the Nifty during the same period.

The top drags from the IT space were Mindtree, down more than 7 percent at 12.43 pm, followed by Coforge, L&T Infotech, Mphasis, Infosys, TCS and Wipro.

According to Srinivas Rao Ravuri, CIO-Equities at PGIM India Mutual Fund, the key positives for the IT sector were strong deal pipeline and revenue visibility as companies across the world were spending more on digitisation.

“Overall earnings growth is still expected to be in the mid-teens. High valuations are discounting a lot of near-term positives and there is no scope for disappointment. We remain positive on the sector considering structural growth drivers,” he said.

Disclaimer: The above report is compiled from information available on public platforms. Moneycontrol advises users to check with certified experts before taking any investment decisions.

Project Syndicate: Inflation isn’t the biggest failure of the Fed

Outside the Box: ‘Net zero’ pledges can amount to greenwashing. This is the better way to reduce deadly carbon emissions

Mutual Funds Weekly: These money and investing tips can shelter your portfolio from the stock market’s worst storms

Extra Credit: $50 billion of student debt could be wiped away in bankruptcy, report says

TaxWatch: 5 ways to avoid tax headaches this year, according to the IRS

The Moneyist: ‘I have no family or relatives I know, or care to know. I have no interest in causes or charities’: Where do I leave my money?