The Nifty continued to slide for the second day, closing 152 points lower at 18,266.60 on October 20 on selling across sectors barring bank. Auto, FMCG, metal, and realty indices slipped more than a percent each.

The Nifty has lost more than 300 points in the last two sessions after hitting a record high of 18,604 intraday on October 19.

It formed yet another bearish candle on the daily chart as the closing was lower than the opening tick. The correction saw the Nifty slip below the 5-day simple moving average (SMA) of 18,333, hinting at a short-term weakness, experts say.

Intraday traders can consider going short below 18,200 for a target in the 18,100–18,050 zone, with a stop above the intraday high, said Mazhar Mohammad, Chief Strategist – Technical Research & Trading Advisory, Chartviewindia.in.

Volatility inched up further to 18.31 levels, rising 5.37 percent from 17.38, indicating further choppiness in the market.

“The Nifty50 continued its slide, which perhaps may be confirming some sort of corrective downswing is in place with a short term top around 18,604 levels,” said Mohammad.

“Unless it recovers and closes above 18,600 levels, strength shall not be expected. In case if it defends 18,200 levels and recoils with a close above 18,458 levels in the next couple of trading sessions, then some sideways consolidation can be in place.”

As the short term trend looks down, further weakness can drag the Nifty towards 17,900, where some critical supports are present, he said.

The Bank Nifty outperformed the Nifty, falling 22 points to 39,518.20 and formed a Doji pattern on the daily chart.

A Doji pattern indicates indecisiveness among bulls and bears, as the index seems to have taken support in the bullish gap zone registered on October 18.

“Some sideways move with positive bias should be expected unless this counter slips below 39,290 levels. In that scenario a sideways consolidation between 39,300 and 40,000 can be expected, Mohammad said.

The index has to hold above 39,300 to witness an upmove towards 40,000, while on the downside, major support is seen at 39,000 and 38,750, said Chandan Taparia, Vice President | Analyst-Derivatives at Motilal Oswal Financial Services.

Also read: Gainers & Losers: 10 stocks that moved the most on October 20 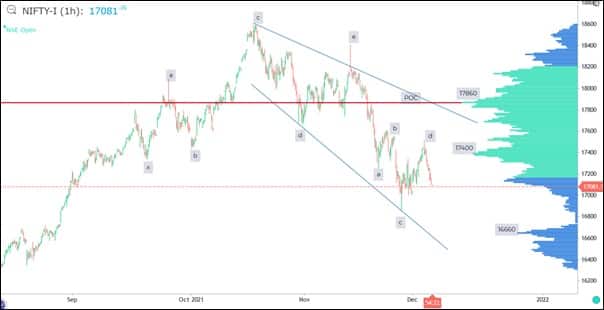 Trade Spotlight: What should investors do with United Spirits, Bajaj Finserv and Mphasis?