Kylie Jenner—the reality TV star, beauty mogul, and member of the Kardashian-Jenner clan—recently invited Vogue magazine into her massive mansion in Los Angeles to shoot an installment of their popular “73 Questions” series.

Clocking in at just over seven minutes, the video has garnered over 1.8 million views thus far. It provides a few scoops for fans, including Jenner discussing her pregnancy cravings, her thoughts on the the funniest family member, and a discussion of the most boring item in her wardrobe (it’s pajamas).

We were just happy to get a peek inside the chic contemporary home Jenner bought in April last year for $ 36.5 million, which she shares with her adorable daughter, Stormi. Her mother, Kris Jenner, also makes a cameo appearance in the video. 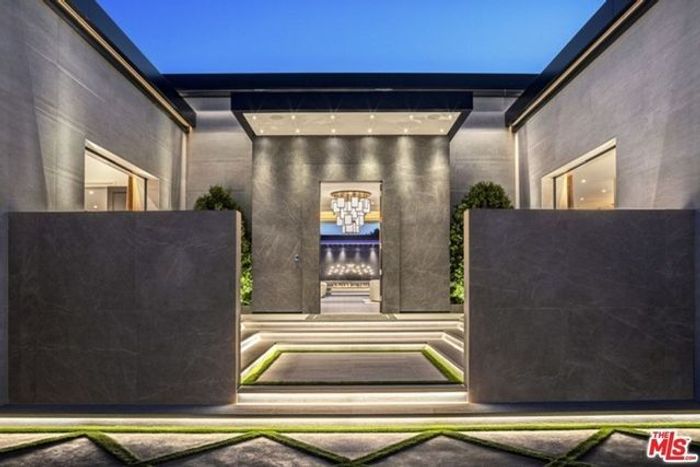 As we reported when Kylie purchased the luxury abode, the brand-new build initially landed on the market in 2019 for $ 55 million.

Without a buyer, the mansion’s price dropped to $ 49.5 million in February 2020. Two months later, Jenner scored a deal at the discounted amount.

While the price tag is an astonishing amount for a 24-year-old, it’s also one she can afford. While technically not a billionaire, she’s very close, according to Forbes magazine, which pegs her net worth at $ 700 million.

Spanning 19,250 square feet, the layout includes a total of seven bedrooms and 14 bathrooms. Security is incorporated into the design, with a dedicated guardhouse with its own full bathroom and kitchen. Other luxe highlights include a chef’s kitchen, two guest apartments, and two additional guest suites with private patios and entrances. An enormous outdoor space features a projection screen and home theater, a gym, and a sports court for pickleball or basketball.

After Jenner opens the dark-gray door and has answered questions about what she eats for breakfast, the camera follows her into the wide-open, lavish living space.

The room is dotted with comfy couches, a seating area, and a large potted plant. It opens out to a central courtyard, blending the indoor space with the outdoors.

“I love the energy of this house,” Kylie says.

She adds she prefers “a night in” right now rather than a night out, and with this space, it’s hardly a sacrifice.

After answering a few more family-oriented questions, she heads to the bar area of the home, which features herringbone flooring. Just adjacent is the fireplace, surrounded by gray stone and flanked by couches, an ideal setup for cozy evenings. 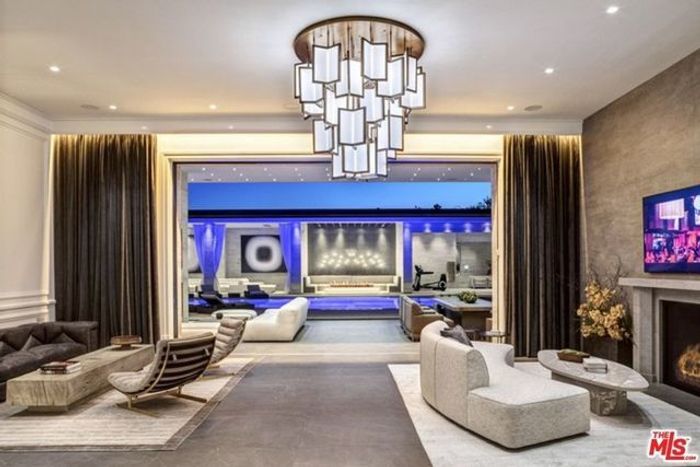 Living room that opens to the courtyard. 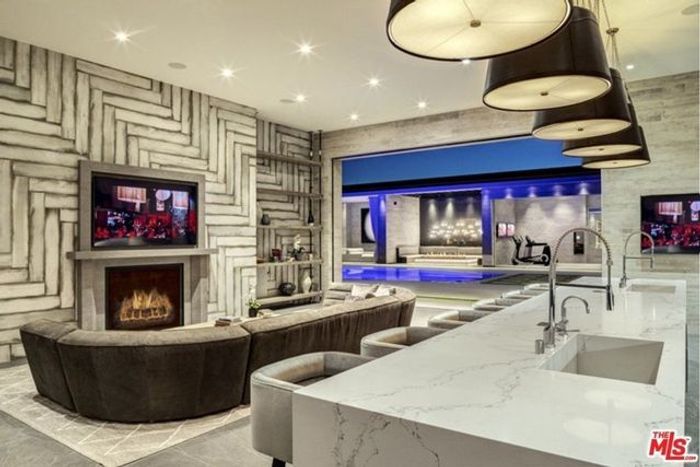 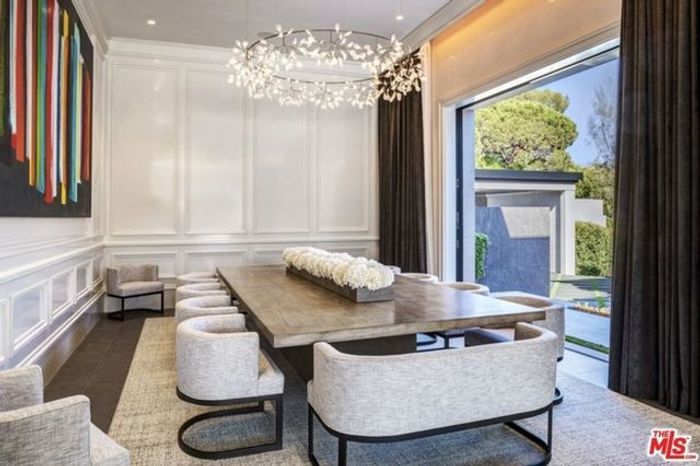 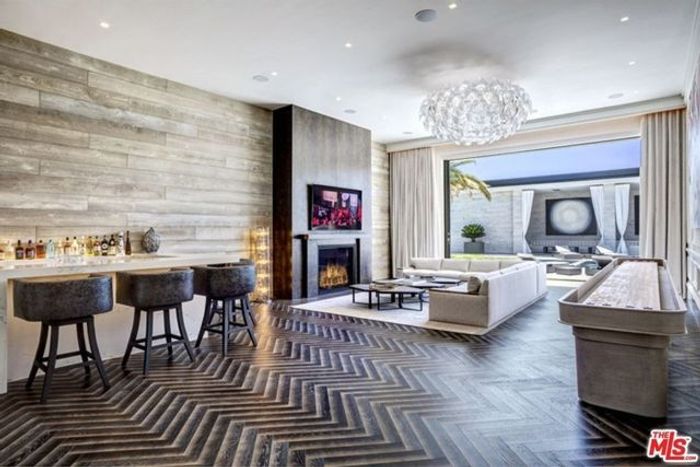 Jenner then heads out to the Instagram-ready courtyard, which comes complete with lawn, seating, and a pool. Stormi is seen making use of the swing set. 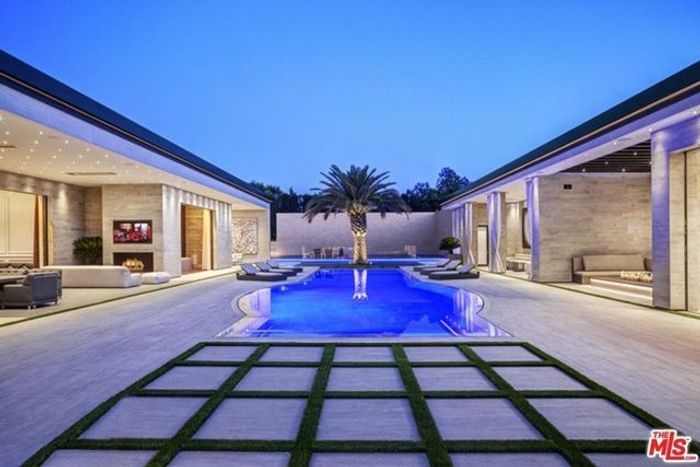 Kylie then glides past the pool, and we get a peek at the outdoor dining space. On the subject of dining, she reveals that her favorite food is sushi and that she snacks on candy. 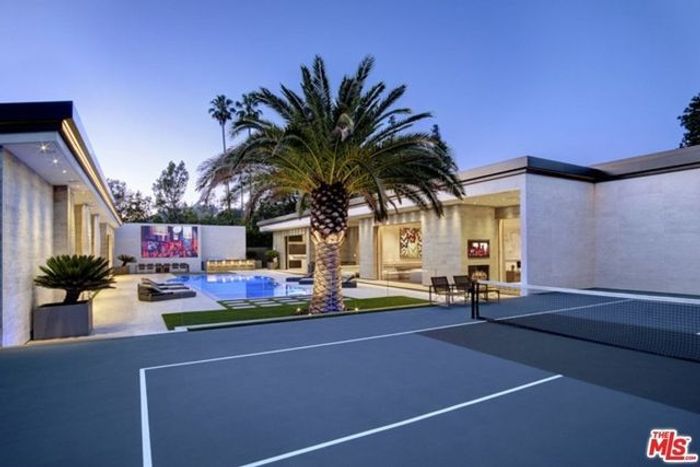 Kylie then heads back inside to the open kitchen and family room, admits to craving frozen yogurt and In-N-Out burgers, and then brings the video to a close.

A few tweaks to the formula

While the beauty mogul has switched out the furniture for softer choices, she’s kept with the neutral creamy palette, including what appears to be the same paint color on the walls.

The lighting appears to have been tweaked. Jenner has opted to switch out some of the pendant lights and kept the sleek recessed lighting. Her modifications add up to a homey, yet unfussy vibe.

She’s stuck with the floor-to-ceiling drapes, but we doubt they’re needed much. This airy compound works best as one giant space that blends indoor and outdoors.

Although she’s the youngest sibling in the Kenner-Kardashian family, Kylie stands out with her real estate. She has made multiple property transactions over the past six years. In fact, she recently picked up a homesite in Madison Club in La Quinta, CA, and reportedly bought a $ 13.5 million place in Beverly Hills with the rapper Travis Scott.

Jenner also recently launched a baby product line and a swim line, which she promotes to her massive followings via her social media accounts. She currently has an astonishing 270 million followers on Instagram.

This story was originally published on Realtor.com.

: As mortgage rates hover near historic lows, will Americans be able to take advantage of the savings?

Cryptos: Dogecoin drops after Tesla’s Musk supports holders selling ‘most of their coins’