Is this what they call buying the dunk?

The latest Pokemon craze may be hard for some people to swallow: collectors are hawking a rare Pokemon Oreo cookie for hundreds and even thousands of dollars on eBay EBAY, -1.43%.

Oreo recently rolled out limited-edition Pokemon versions of its signature chocolate cookies stuffed with sweet cream, which feature the character designs from the hit card game, animated series and Nintendo NTDOY, +1.68% games that first started sweeping the globe in the 1990s. These Oreos feature just 16 of the roughly 900 pocket monsters that make up the ever-expanding Pokemon roster.

But Oreos featuring the cat-like Mew character are the rarest of the cookie monsters, apparently, which tracks with how rare Mew is in many of the games, as well.

So now lucky shoppers who have managed to get their paws on Mew Oreos are listing them on eBay’s bidding and resale site, marked up at upwards of $ 200 or $ 2,000 a pop. Looking up “Mew Oreos” on the site pulls dozens of listings, including one asking for a jaw-dropping $ 10,000 (plus $ 5.25 shipping) for the Mew cookie. Or here’s another one for almost $ 30,000, plus $ 10 shipping — the price of a new car, or a few years of college tuition, depending on the state.

Keep in mind that the full packs of Pokemon Oreos sell in stores for less than $ 4 — while supplies last. They first hit shelves on Sept. 13, so it’s probably only a matter of time before full packages of cookies also start stacking up in eBay listings as the limited-edition goodies become more difficult to find. 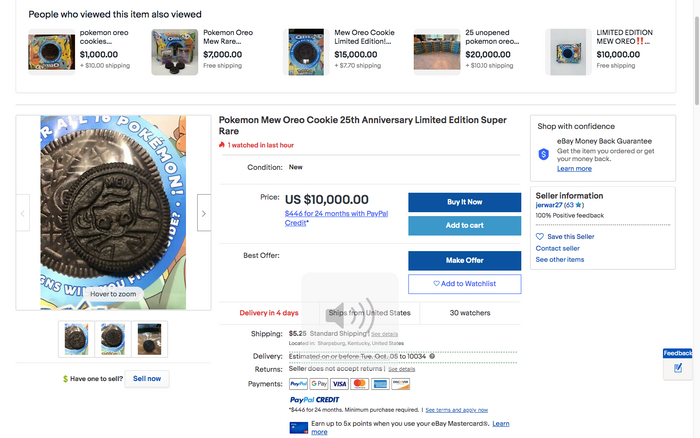 Rare Oreo cookies featuring the Pokemon character Mew are being sold on eBay for up to tens of thousands of dollars.

Granted, Pokemon fans have been obsessed with catching ‘em all since the very beginning of the franchise 25 years ago, and the pandemic has only whet collectors’ appetites. Pokémon Trading Card Game (aka Pokemon TCG) cards have spiked in value over the past few years, and eBay’s “State of Trading Cars” report earlier this year noted that Pokemon Card sales surged 574% from 2019 to 2020. A rare first edition Charizard card (depicting a fiery dragon) sold for more than $ 300,000 at auction in March. In fact, a special card depicting the president of The Pokemon Company sold for nearly $ 250,000 at auction in April; not a Pokemon, but the president of the company.

The craze has led to Target TGT, +1.58% temporarily stopping the sale of Pokemon cards (in addition to NBA, NFL and MLB cards) in stores after trading-card fever led to four people getting arrested after fighting over sports trading cards at a Wisconsin location.

On the video game front, the mobile phone game Pokemon Go still has plenty of players shelling out plenty of real-world money in the game’s virtual store. Pokémon Go made $ 1.92 billion in revenue in 2020, according to gaming research firm SuperData, and the game has raked in $ 5 billion since it debuted five years ago, according to analyst firm Sensor Tower.

And the franchise has got remakes of the 2006 Nintendo DS games Pokémon Brilliant Diamond and Shining Pear coming to the Nintendo Switch on Nov. 19. So fans can wrestle with the weighty financial decision of whether to drop $ 360 or so on a Switch (if they don’t have one) and one of the new games, or to go all-in bidding on a Mew Oreo cookie.

A previous version of this story miscounted the number of Pokemon species in the franchise.

: Virgin Galactic cites potentially faulty part as it postpones its next space flight

MarketWatch First Take: Cisco blames China lockdowns for its forecast cut, but there could be deeper problems

: Confused about inherited IRA rules? Here’s what to know