With the influx of liquidity fuelling global capital markets, the international stock markets are witnessing a record number of initial public offerings (IPOs). As per the EY Global IPO report for Q2 2021, riding a wave of momentum from Q1 2021, global IPO deal numbers and proceeds have put in an exceptionally strong performance in Q2 2021: the total funds raised on NASDAQ during H1 2021 amounted to $ 49.2 billion, followed by $ 35 billion on the NYSE and $ 27.4 billion on the Hong Kong stock exchange.

Currently, laws in India permit listing of debt securities on international stock exchanges and indirect listing of equity shares through the American Depository Receipt/Global Depository Receipts (ADR/GDR) route only. In December 2018, an expert committee constituted by the Securities and Exchange Board of India (SEBI) released a report that examined benefits of allowing listing of equity shares of companies incorporated in India on foreign stock exchanges, and recommended various tax and regulatory changes to facilitate offshore listing of Indian companies.

In September, the Companies (Amendment) Act was passed enabling listing of Indian company on overseas market — detailed guidelines are awaited. Once these guidelines are issued, Indian companies may potentially be able to list in overseas capital markets — with attendant benefits such as access to a much larger pool of capital, broader investor base, higher valuations, increased brand awareness and assistance in future international expansion plans.

At this point, the procedural aspects for enabling Direct Overseas Listing from the perspective of Indian exchange control are not clear. The rules governing utilisation/ bringing into India of the IPO proceeds by the company, and the proceeds of an Offer for Sale (OFS) by existing shareholders, especially Indian residents, need to be prescribed. Whether and how Indian residents can purchase/sell shares of an Indian company listed on the overseas stock exchange, and the conditions/limits subject to which such trading would be permitted need to be provided for. It will also be important to understand how the regulator proposes to monitor investments from certain countries under the government route, where such investments are to happen on an overseas listing platform.

From India’s tax perspective, transfer of ADR/GDR outside India, by a non-resident to another non-resident is not taxable. The Sebi committee has also recommended a similar tax treatment for non-residents investing in shares of an Indian company listed abroad. At present, shares of companies listed in India enjoy beneficial capital gains tax rates (see table below). However, as the law exists, the capital gains tax regime available to shares of a company listed in India is not available to shares of an overseas listed Indian company. 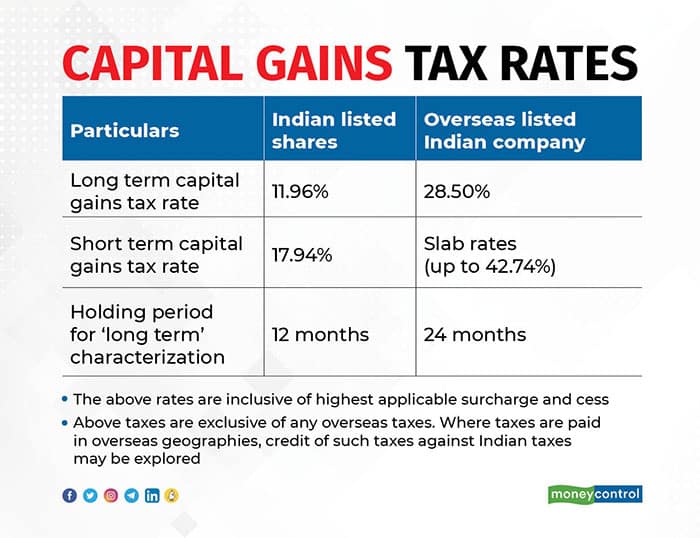 In line with the recommendation of the Sebi committee, it is anticipated that the Ministry of Corporate Affairs will issue necessary notifications/clarifications with regard to Direct Overseas Listing similar to ADR/GDR or masala bonds. Also, an Indian company listed, both overseas and in India, would be governed by Indian listing regulations and listing framework of concerned permissible jurisdiction as well.

Access to global capital is no doubt an exhilarating moment for an organisation, accelerating its growth potential and reputation. While the enabling provision for Direct Overseas Listing is a significant step, an early release of practical guidelines may provide Indian companies an opportunity to participate in the ongoing ‘IPO boom’ and a chance to raise capital from international investors at a time when global capital markets are flush with liquidity. This could not only enhance the exposure of Indian entrepreneurs to the international investing community, but also set the stage for positioning India at the forefront of the tech-driven global transformation of the business ecosystem currently underway. This would naturally provide a significant boost to the Indian economy.

Why investors should tread with caution in Paras Defence IPO

DAILY VOICE | Fed may give advance notice on tapering this week followed by formal announcement in November: Milind Muchhala of Julius Baer