Shares of Expeditors International of Washington Inc. peeked into positive territory Tuesday, reversing earlier sharp losses, after the airfreight and ocean freight company beat second-quarter profit and revenue expectations, but said the supply-chain problems that have crimped business should continue for the foreseeable future. 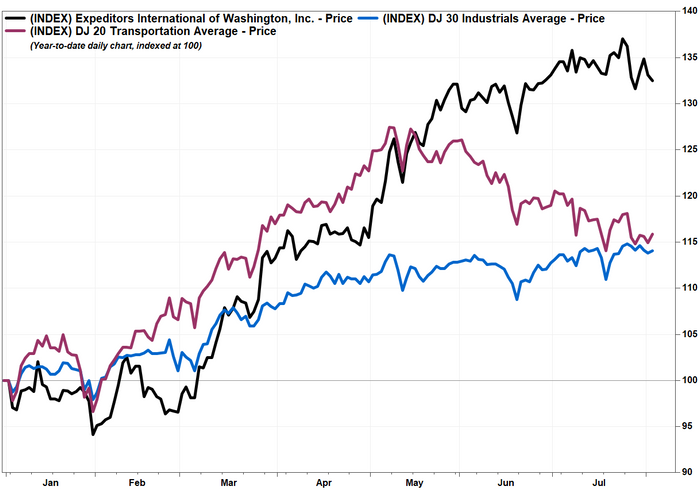 CEO Musser said that while airfreight tonnage and ocean container volumes reached records, and buy and sell rates remained significantly higher than pre-pandemic levels, “it has not been easy,” as port congestion and equipment shortages that mucked up trade flow “were not appreciably better” than they were earlier in the year.

“Currently we do not foresee any meaningful improvements to the operating environment over at least the remainder of the year, as the global infrastructure for moving freight seems nearly stretched to its limit,” Musser said. “Robust demand is bumping up against capacity constraints in the air and ocean markets, all of which is made more challenging by limited warehouse space, staffing constraints, port congestion, equipment dislocations, and driver shortages, not to mention additional disturbances such as the closure of the Yantian port due to a COVID-19 outbreak in May or the blockage of the Suez Canal back in March.”

More: Santa could be stalled as supply issues put toy sector at risk for the holidays.

Musser remains optimistic that conditions will eventually improve, he just can’t predict when or how.

Cowen analyst Jason Seidl reiterated his market perform rating, but raised his stock price target to $ 139, which nearly 10% above current levels, from $ 109.

“While the company does not offer guidance, it appears trends in the near term continue to hold steady and strong, while an eventual stabilization of rates and imbalance will normalize over time,” Seidl wrote in a note to clients. “We expect the normalization story to likely play out in 2022, given industry commentary we have heard throughout Q1 earnings.”

Key Words: ‘I don’t think there’s a lot of upside from here,’ says stock-market legend, but U.S. stocks could rise in 2022 if earnings are good