Looking at the sentimental indicator, Nifty OI PCR for the week has decreased from 1.092 to 0.94.

Consolidation continues in Nifty as it is trading in a broader range of 15,900—15,500 for five weeks now, a series of gap up and gap downs with high volatile sessions has been witnessed in weeks gone by still indices fail to make any directional move.

While Bank Nifty on the other hand had a decent run as its outperformance Nifty with gain of around 1 percent last week, Bank Nifty closed around 35,270.40. Bank-Nifty over the week traded between 36,000 to 34,500. On the OI (open interest) front, short and long built up has been witnessed last week in Nifty and Bank Nifty, respectively.

Further diving into the Nifty upcoming Weekly expiry Call writers showing aggressions by building more position compared to put writers. Immediate and vital resistance stands at the 15,800 levels where nearly 49L highest among all followed by 16,000 levels with 42L shares.

On the lower side, 15,000 stands at the vital support level where nearly 34L shares has been added while 15,700 will work as immediate support with addition of 34L shares.

India VIX, fear gauge, rises nearly 7 percent from 12.09 to 12.96 over the week. India VIX is trading near the lowest level of pre-COVID-19 crash. Cool off in the IV has given relaxation to the market. Further, any downticks in India VIX can push the upwards momentum in Nifty.

Looking at the sentimental indicator, Nifty OI PCR for the week has decreased from 1.092 to 0.94. Bank Nifty OIPCR over the week decreased from 0.83 to 0.789 compared to July 9. Overall data indicates more Put writers over call writers in Nifty & Bank Nifty.

Looking towards the top gainer & loser stocks of the week in the F&O segment. AU Small Finance Bank topped by gaining over 14 percent, followed by Tata Steel 9 percent, Granules 8.6 percent. Whereas, Tata Motors has lost over -11.7 percent, NMDC -6.8 percent, HPCL -6.0 percent over the week.

Conclusion: Considering the consolidation Nifty along with in India VIX, upcoming week can be approached with a low-risk strategy like Modified Call Butterfly in Nifty. 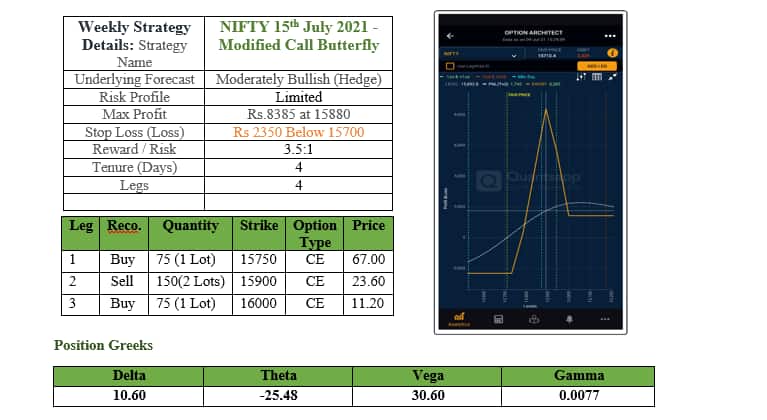 Tags
AgarwalButterflyCalldeployModifiedNiftyShubhamspreadstrategy
Previous Post « While trading options what should be a practical reference point â€” spot or futures?
Next Post » Technical View: Nifty forms Doji pattern, buying opportunity only above 15,900