Some banks are shifting away from financing development of the vulnerable Amazon rainforest but most in the financial sector are still playing some role, their critics say, in fueling corruption, human rights violations and environmental harms despite commitments that increasingly part of the popular Environmental, Social and Governance (ESG) investing movement.

That’s a position from environmental advocacy groups Stand.earth and Amazon Watch in a new scorecard and report released early Thursday.

“To put it simply, banks’ current ESR [environmental and social risk] policies are failing them. These policies do not adequately manage risks, are not strong enough to avoid Amazon destruction, and do not meet the urgent need to stop fossil fuel expansion globally,” said Angeline Robertson, senior investigative researcher at Stand.earth Research Group and one of the lead authors of the report.

Banks provide revolving credit facilities worth billions of dollars to their oil trading clients, but don’t always ask how the money will be spent, which means that clients may fund projects, transactions, and companies that wouldn’t otherwise pass banks’ ESR screening processes, the report said.

Read: Inclusion of these U.S. money managers means nearly half of all asset funds managed globally are linked to climate-change pledge

Authors said the position change earlier this year from the influential International Energy Agency should put new pressure on banks. IEA said the world must stop investing in new oil and gas wells in order to hit ambitious climate goals by 2050.

Rabobank, ABN Amro, and ING are at “moderate” risk; BNP Paribas, Credit Suisse, UBS, Société Générale, and Crédit Agricole are at ”high” risk; and Natixis, Citigroup, JP Morgan Chase, Goldman Sachs, Deutsche Bank, and HSBC are at “very high” risk. All banks were provided a summary of their scoring and given the opportunity to respond before the release of the report. 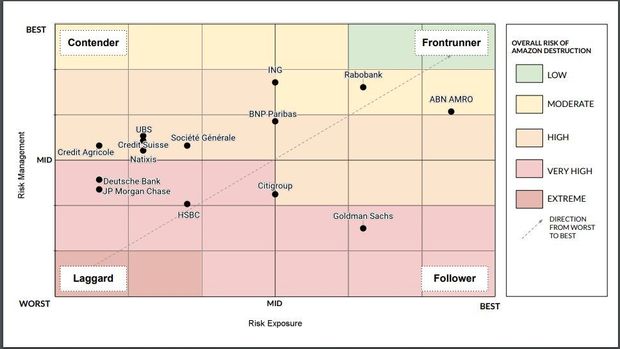 In a separate report earlier this year, findings from a handful of climate organizations, including the Rainforest Action Network, showed that some 60 of the world’s largest commercial and investment banks have in total put $ 3.8 trillion into fossil fuels from 2016 to 2020, the five years after the voluntary Paris Agreement was signed. The multinational pact’s goal is to limit global warming to well below 2 degrees Celsius, and preferably to 1.5 degrees, compared to pre-industrial levels. Beyond oil patch financing, global coal projects also continue to be funded.

Among the key findings from the Stand.earth and Amazon Watch report:

Credit Suisse finances finance the trade of oil from the Putumayo region in the Colombian Amazon, which faces heavy Indigenous resistance and brutal police crackdowns, despite existing biodiversity and human rights policies that clearly indicate it should not be financing in the region, the advocacy groups say in their report.

Read: Here are the oil and gas companies whose methane emissions intensity is 6 times the national average (hint: it’s not the majors)

“This is happening despite all banks having corruption policies, but only viewing it as a business risk and not including it in their ESR frameworks,” the report authors say.

JPMorgan Chase is the biggest banker for the fossil fuel industry worldwide, and it continues to fund Brazil’s national oil company, Petrobras, which is ranked one of the largest fossil fuel expansion companies globally.

This new report, titled “Banking on Amazon Destruction,” comes on the heels of an August 2020 investigation revealing European banks financing the trade of Amazon oil from the headwaters region of Ecuador and Peru. This led to commitments by top banks to uphold their policies and end trade financing in that region, but the 2020 investigation also revealed additional relationships between banks, oil companies, and oil traders in contradiction with banks’ ESR policies and risk management screening processes in the broader Amazon rainforest.

The groups are calling for a commitment for the lenders to exit all loans, letters of credit, and revolving credit facilities for all oil traders (especially those implicated in corruption controversies) active in the Amazon biome as soon as possible, or at the latest by the end of 2024.

And they want a commitment to ending all existing oil and gas financing and investment in the Amazon biome as soon as possible, or at the latest by the end of 2025.

For its scoring, the advocacy groups said they did not consider positive actions such as commitments to sustainable investment and financing since, they said, “these are not material mitigating measures for on-the-ground impacts in the Amazon from oil and gas. The groups gave positive evaluations to all material risk management strategies for key issues pertinent to the Amazon (oil expansion, deforestation, biodiversity loss, indigenous rights, pollution and corruption), as well as stakeholder and client engagement strategies.

The banks were shown the findings ahead of the release.

A Word from the Experts: ‘Chances are’ children and teens are ‘going to do great’ with a COVID-19 vaccine, says Cleveland Clinic pediatrician

Earnings Outlook: Zoom Video earnings: Expectations may be coming back to earth