Recently, the Uttar Pradesh government directed all the schools not to hike the fees for the academic session 2021-22.

School fees have increased this year despite classes being online amidst COVID-19. As per a survey by LocalCircles, 63 percent of parents say that the schools their children go to have increased fees this year though classes were online.

Moneycontrol reported earlier how fee payments and annual fee hikes were a cause of concern among parents.

Here, 33 percent of the parents said schools their children go to have increased fees by over 20 percent this year despite classes being online. 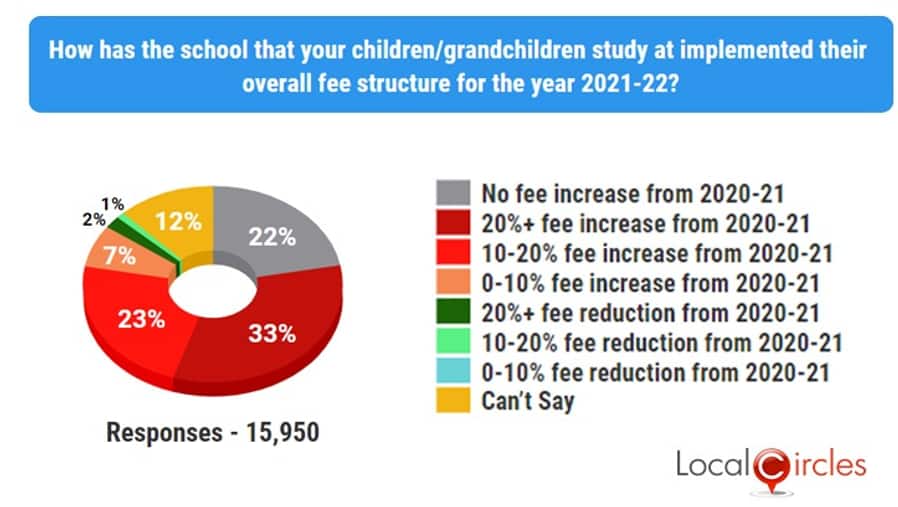 Alternatively, it was found out that 33 percent of parents said that schools their children go to have increased fees by over 20 percent this year despite classes being online. 23 percent said school fees increased by 10-20 percent, while 7 percent said it increased from 0-10 percent.

There were also 25 percent of parents who said that the fee of the school their children attend remained the same or reduced.

Further, 65 percent of parents said their state government has been inactive or ineffective in regulating school fee increase during the COVID-19 pandemic.

Recently, the Uttar Pradesh government directed all the schools not to hike the fees for the academic session 2021-22. It passed a mandate stating that if any school has charged a hiked fee for the new session, the additional amount will be adjusted in the coming months.

The shift to online classes has drastically reduced the expenditure incurred by schools on electricity, maintenance, equipment usage, contract staff like guards, housekeeping, etc. and other miscellaneous costs. Parents said in the survey that it is not fair to charge students for facilities that the school is no longer providing due to the pandemic.

However, school managements argue that some of the gains have been offset by increase in digital costs of education delivery and equipping teachers.

The pandemic has brought on salary cuts and earnings impact for many parents, and with schools continuing to increase fees, it has become an additional burden for many households.