Last 10 years of data for July give hopes to bulls; Nifty could surpass Mount 16K

14:02 2021
Print This Article
👤by India
Filed under
Market Outlook

Though the Indian market remained volatile in June amidst muted global cues, the Nifty50 climbed 0.9 per cent and hit a fresh high of 15,915 on June 28.

Soon after hitting the high, the index seems to be consolidating in a narrow range. But experts feel that the technical setup remains strong as the index still trades above the crucial support levels. This means that the bulls have a chance to take the Nifty50 beyond Mount 16K.

The anecdotal evidence also suggests that bulls have had an upper hand at least in 6 out of the last 10 years in July. The Nifty50 rallied more than 7 per cent in July in 2020, while in 2018 and 2017, the index rose by over 5 per cent each.

“Mr. Market was mostly rangebound in June as it touched the levels of 15,450 on the downside, driven by volatility. Yet the bulls were able to gain control and drove the overall trend. Bulls are expected to continue the same momentum in July as well,” Nirali Shah, Head of Equity Research, Samco Securities, said.

“In terms of the important levels, the Nifty50 should be fine above the levels of 15,500, which remains a crucial support for the bulls. On the upside, 16,100 is a good resistance zone for July. Traders can initiate longs along the support levels with sufficient stop-loss,” she added. 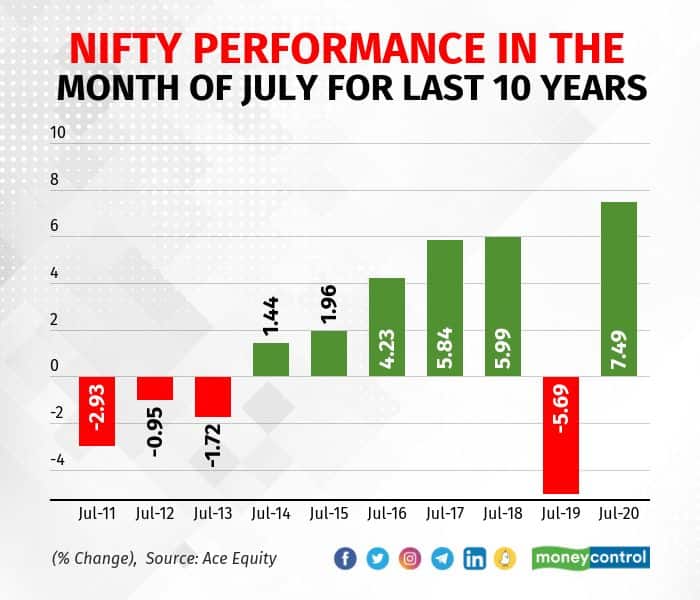 The Nifty50 hit an all-time high of 15,915 in the last week of June but failed to sustain the upper band of consolidation around 15,900, and, consequently, underwent profit-booking.

As a result, the weekly price action formed a bear candle carrying higher high-low, indicating extended breather amid stock-specific action for the week ended July 2. In the process, the Nifty smallcap index scaled to a fresh all-time high, highlighting the resilience.

“We believe that the past three week’s healthy consolidation (15,900-15,500) helped the index to form a higher base in the range of 15,600-15.500. We expect the index to gradually resolve above the upper band of consolidation and eventually head towards 16,100 in coming weeks as we approach Q1FY22 earnings season,” Dharmesh Shah, Head, Technical, ICICI Direct, said.

“Dips should be capitalised on as incremental buying opportunity. Our constructive bias on the benchmark is based on the thesis that the index has witnessed a shallow retracement as over past three weeks, it retraced merely 38.2 per cent of preceding four weeks rally (15,900-15,600), indicating a healthy consolidation,” he said.

The Moneyist: ‘My company may IPO and make me a millionaire’: My boyfriend and I have a cohabitation agreement. If we split, would he have a right to my money?

Budget 2022 | Policymakers are trying to find a way to put the economy back on track, says Ankit Yadav of Market Maestroo

Living With Climate Change: Climate change fueled 3rd costliest losses ever in 2021 — less than half of that property was insured

Wall Street ends down as markets whipsaw ahead of Fed meeting

The Big Move: I’m selling a home with a vacant lot, but my buyer can’t get a loan to cover everything. Should I let him pay me in installments?