On a Zoom call in June 2021, Ronnie Screwvala spoke about his new book, upGrad, and what’s lost in meetings conducted over video call.

Five years ago, Ronnie Screwvala drew on his 20-plus years of entrepreneurial experience to write his first book: Dream With Your Eyes Open. “I was very clear (then) that I am an accidental author and not an author,” he says over a Zoom call. 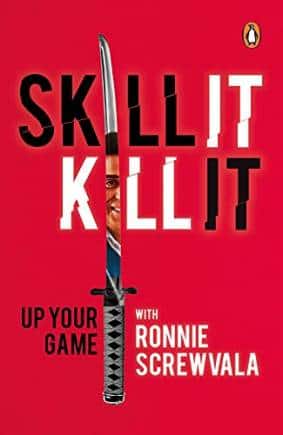 Yet, his self-proclaimed status as an accidental author changes today (July 5, 2021), with the launch of his second book – Skill It, Kill It: Up your Game. (Surely, a second time indicates greater deliberation.)

Skill It, Kill It draws on Screwvala’s experiences at upGrad, an ed tech firm in which he is a co-founder.

The book, written in the first person, is filled with Screwvala’s personal experiences of honing and using soft skills – Screwvala says any idea that he could not connect with his lived experiences was tossed out.

Consider this segment from the book, for example: “‘Listening is one of those lifelong skills we need to continuously work on and improve. It’s a fine balance,’ says Kola. ‘You have to know when to listen but also when not to listen.’”

Or this one: “Stories are powerful because they influence and impact people by shaping minds and moving hearts. C.P. Gurnani summed it up this way: ‘Storytelling is the secret sauce of communications. The words “Let me tell you a story . . .” are the five best words to start your presentation, pitch or conversation with.’”

In a conversation with Moneycontrol in late June, Screwvala spoke about the book and upGrad. Edited excerpts:

Did this book grow out of your engagement with upGrad over the last five years?

(For the cover) I wanted to shoot myself with a Samurai robe (Hakama) and sword (Katana) but then Covid came in and I didn’t want to go to a studio, so I just did a graphic cover.

You mentioned that the book is not a plug for upGrad. But there is a segue to what upGrad does?

We do a lot of soft skills courses but we don’t market that – it’s an add-on. What we’ve found in the last five years is that if we don’t spend one month out of the 11-month course to augment soft skills with live lectures on weekends, they (the students) will do phenomenally well in their course but flunk their interview.

So it is very much a mix and match and marry. A lot of this book will become video chapters on our app at upGrad.

You mention in the book that you did some focus groups before you began writing. What did you learn from those?

The real element was people’s hesitation for self-conviction, self-confidence.

The other thing that struck me with a lot of people was the comfort zone everyone is in: everyone feels, if they go under the radar, they have a better chance of survival, which is so wrong. But that was not something that was stated. That was something you gleaned.

Tell us about the structure of the book. You have quotes from Amitabh Kant and Vani Kola, among others, woven into the text. What prompted that?

Because I am not an author, and because I am a little bit of a non-linear thinker – the structure didn’t come about (right away). When my co-writer said first let’s draw up the index, I said no, let’s draw up a 3x of the index. We’ll even write a few chapters and if that doesn’t connect, we’ll narrow down to the chapters that do. Somewhere along the line, we had like 22 chapters, because there were 22 challenges that we thought were there. And then we narrowed it down to 11 or 12.

The second one is that when you’re in (writing) mode, you are constantly asking questions. I used the quotations (answers) from Amitabh Kant and Vani Kola, and others, but also from learners. And I think what I inserted were very identifiable quotes…

Third, for me, narrative first person is very important. (Wherever) I felt that I was losing my first person, and I was going into a how-to book (we cut those chapters). So my criterion was that if I suddenly got into the three S’s of this, the four C’s of that, that would not make sense.

Narrative first person and summarizing in the end (takeaways) are two things that I like doing in my personal approach.

Work from home and video meetings have become a whole new space to exercise and grow our soft skills over the last 16 months. What is your take on this?

I think what we’re lacking in Zoom is body language. When you are interacting with colleagues, interviewing people, hiring people, forming new partnerships, body language plays an important role, and this (places one hand over his head and the other below his chin) can’t be body language. So I think that’s a problematic one.

Second, I think that the digital space, in the beginning, sounds romantic. “Wow, nice stuff! I am communicating and I’m not getting lost.” But actually the warmth of sitting around a room, having a moment of silence (is missing). When you’re on a Zoom call, everyone thinks this is it. Whereas if you were having a meeting or a brainstorm (session), you could have almost 60 seconds of silence and no one would feel that because you are seeing other people’s body language around the room. That is extremely missing. To me, that is a real communication situation.

I guess the third one is that it becomes very transactional, and I think that’s also a big problem.

Fourth and most amazing is that in spite of all this, I find that 75% of the people want to keep their cameras off … and I feel the communication is getting less and less…

Tell us about the idea behind “thinking big” – you’ve devoted a whole chapter to it in the book.

Small city, big dreams – these are mental handicaps for all of us. You can’t start by saying I come from a small town, so do I have the ability to talk about that (insert topic relevant to your growth in the business or industry)?

When I moved from Dunne’s Institute to Cathedral School, that thought did cross my mind: “Oh, I am changing social strata and how am I going to get comfortable?” That can happen to people. But the first thing is – small city,  big city – it’s in the mind.

If you are not participative, it doesn’t make a difference if you are sitting next to the boss for the rest of your life – you will still not get noticed.

In April, when upGrad raised $ 120 million in funding from Singapore’s Temasek, the company spokespersons talked about going global. Where is the company at with respect to those ambitions?

upGrad has feet on the ground and teams in place in APAC, which includes in Singapore, Indonesia, Vietnam, Middle East, UK, USA – so these are the six places where we have feet of the street. These are big markets for us. Plus, we are looking at M&As (mergers and acquisitions). So I think international footprint, we are moving in that direction.

India’s a really large market; I think the growth is phenomenal here. But, because it is a price-sensitive market, the ability to concept sell and convert will take its time – there will come an inflection point. I can’t twiddle my thumbs with the growth ambitions that we have, to only look at that. But it is a very important part of the market that we have.

Whom do you see as your competitors?

In higher education, there are two-three other players. At this point, everyone is opening up the market. I am not here to say where are we in ranking based on who’s raised funds. The differentiator for us is deep learning. We are not a marketing agency for other universities. We help, we co-create and we have a very high sense of live touch and engagement even though we are 100% online.

Finally, what do you hope your readers will take away from the book?

The overriding aspect is: give thinking and respect to soft skills. Take one, take two chapters, you don’t need to take 10. No one needs to take 10. Think about what is relevant for you. But understand that without that balance (of subject expertise and soft skills), you won’t be able to torpedo yourself in the world that is going to be with us.

Gainers Losers: 10 stocks that moved most on April 29