Christopher Wood, global head of equities at Jefferies, has launched an India long-only equity portfolio of 16 stocks, similar to the existing Japan and China portfolios.

The Indian portfolio, which has been put together in consultation with Jefferies head of India research Mahesh Nandurkar, features 16 stocks including HDFC, ICICI Bank, State Bank of India, Reliance Industries, Bajaj Finance and Maruti Suzuki (India), compared to 21 stocks in the Asia ex-Japan long-only portfolio.

Wood said he remains convinced that India is at the start of a new housing cycle after a seven-year downturn.

“This is certainly not a perfect time to start an Indian portfolio since the Sensex is near all-time high though, for that matter, so are many other stock markets. Still GREED & fear remains convinced that India is at the start of a new housing cycle after a seven-year downturn, after the mother of all consolidations in the developer industry, which is why there will be a 17% weighting in the property sector,” said Christopher Wood

The portfolio puts more weight on energy stocks (20 percent) with Reliance Industries and ONGC, while has set aside 17 percent for the real estate stocks including Godrej Properties, Century Textiles and DLF in the newly launched portfolio.

However, the large weightage (40 percent) has been given to financials with names like ICICI Bank, SBI, HDC, Bajaj Finance, ICICI Prudential Life Insurance and ICICI Lombard General Insurance featuring in the India long-only equity portfolio. 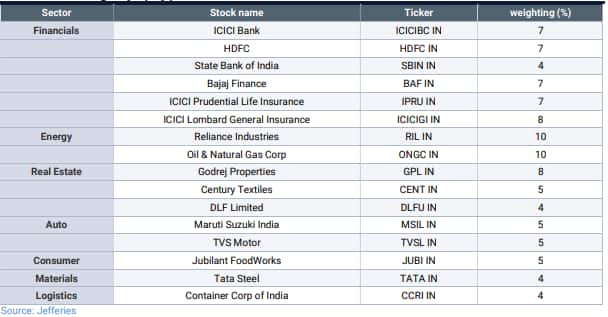 “This portfolio will be domestic demand focused though it will have a decent energy weighting to hedge, in part at least, the obvious risk of a higher oil price on Indian financials and other interest rate-sensitive sectors.GREED & fear remains bullish on oil,” Wood added.

Disclaimer: MoneyControl is a part of the Network18 group. Network18 is controlled by Independent Media Trust, of which Reliance Industries is the sole beneficiary.

Sebi comes out with modalities for accredited investors