In a volatile week, the benchmark Nifty touched a lifetime high of 15,915 but erased gains and closed below 15800 levels. Meanwhile, the broader market, especially the smallcaps, continued their good run.

“Given the current low-interest-rate scenario and ongoing bull market, investors are rushing towards avenues that can generate the most returns,” Nirali Shah, Head of Equity Research, Samco Securities said.

“Hence, one can see the increase in Demat accounts opened in the past year, the exuberance in IPO subscriptions, and the rush into mid and small caps,” she added. 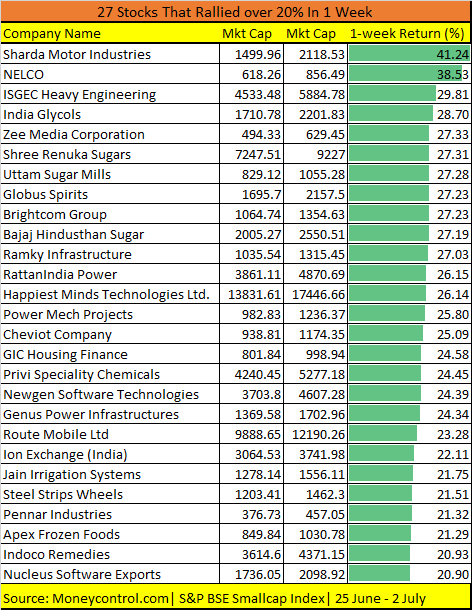 “The ballooning of the new Delta variant globally is taking a toll on the international markets. In the coming week, the domestic market will continue to track cues from the global markets in order to gain direction in movement,” Vinod Nair, Head of Research at Geojit Financial Services said.

“Reducing covid cases and progress in vaccination domestically will continue to pump optimism in the market. Services and Composite PMI data are the two major economic data awaiting release next week,” he said.

Among sectors, power, and telecom stocks suffered the most. The power sector has been under the limelight driven by strong optimism as power companies look to set up green energy capacities over the long term.

“While these served as positive developments for the industry, the sector saw a strong upmove over the past couple of weeks. Now, with the recent rally seeing some cooling off, traders mostly booked profits causing a pullback in the sector,” says Shah of Samco Securities.

Where is Nifty headed?

Nifty50 closed with a loss of 0.8 percent, below 15,800 for the week ended July 2. Technically, the index has taken good support at Lower Bollinger Band formation and pulled back further.

“The stochastic has indicated positive bias although the MACD is still showing some weakness with negative crossover. On an hourly chart, the index has moved above the 21 HMA & also formed like Rounding Bottom, which points to further recovery for the near term,” Sumeet Bagadia, Executive Director at Choice Broking said.

“At present, the Nifty seems to have resistance at 15915 levels while immediate support comes at 15600,” he said.

“The market saw outstanding returns from the recently listed IPO companies, especially in Route, Happiest & Sona Comstar. We feel that there is still a lot of momentum in the smallcap space across different sectors,” he said.

After The Bell: Sensex, Nifty lose over 1% each, what should investors do on Friday?