The energy sector has been the best performer in the U.S. stock market this year, but it isn’t too late to jump in, as the setup is still attractive for the reopening of the economy.

On June 1, oil prices rose to a two-year high. And an analysis by GasBuddy showed gasoline demand in the U.S. at close to normal levels, possibly poised to hit record levels this summer.

Energy recovery has a long way to go

The S&P 500 energy sector SP500.10, was up 36% for 2021 through the end of May. (All price changes in this article exclude dividends.) That’s the best sector performance in the benchmark index so far this year.

Stretching out the timeline paints a different story: 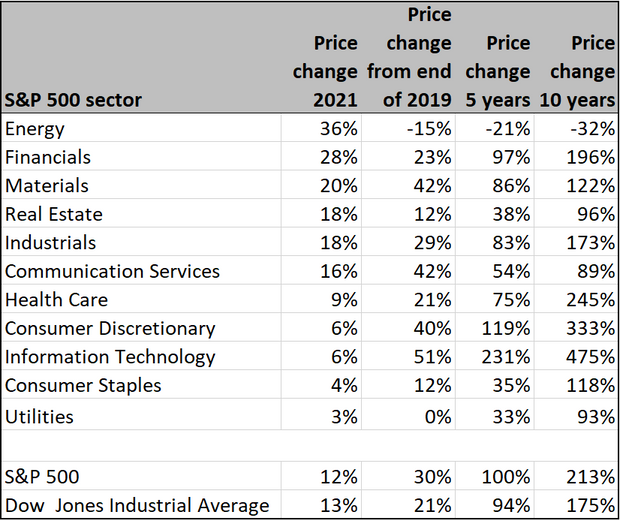 If we look at price changes from the end of 2019 — before the coronavirus pandemic hurt demand for West Texas crude oil CL00, +0.96% so badly that forward-month futures contracts dipped momentarily in the red — the energy sector is the only one not showing a significant gain.

The long-term figures are even worse, underscoring how shares of energy producers haven’t yet returned to their levels before the great oil-price crash that began during the summer of 2014.

The table includes price changes for the full S&P 500 SPX, -0.05% and the Dow Jones Industrial Average DJIA, +0.13%. The Dow was bogged down by holding both Exxon Mobil Corp. XOM, +3.58% and Chevron Corp. CVX, +2.76% for most of these periods until Exxon was dropped from the group of 30 blue-chip stocks in August of last year.

There has been a shift to cyclical sectors of the stock market this year, as some investors have become afraid that rising consumer prices may cause the Federal Reserve to reverse its stimulative policies that have helped prop up the U.S. economy, and kept interest rates and borrowing costs down.

Consumer prices rose 0.8% during April from the previous month and 4.2% from a year earlier. That was the largest year-over-year jump in prices in 13 years.

During an interview last week, Michael Arone, the chief investment strategist for State Street Global Advisors’ U.S. SPDR exchange traded fund business, said investors should keep an eye on the labor market for signals of when the Federal Reserve might begin curtailing its bond purchases and allowing long-term interest rates to wise. He expects our current expansion cycle that favors energy stocks and other cyclical sectors to continue until early 2023.

For a list of energy stocks, it helps to expand beyond the S&P 500. The energy sector now comprises only 2.8% of the index’s market capitalization, down from 7.1% five years ago.

We then added another group of energy stocks — master limited partnerships, or MLPs, which are primarily income vehicles. As limited partnerships, these investments pass income (and capital losses) from pipelines, fuel storage and transportation businesses through to unit holders, who receive K-1 forms instead of 1099 dividend forms to report income. That makes tax preparation more complicated. MLPs aren’t included in the S&P indexes.

One way to invest in this group of energy stocks is the Alerian MLP ETF AMLP, +2.85%, which holds 17 MLPs. The ETF pays a quarterly dividend and removes the tax complications associated with direct ownership of MLPs. Its current dividend yield is 8.84%, reflecting low MLP prices. (Excluding dividends, AMLP’s share price was up 36% for 2021 through May 28. But it was down 15% from the end of 2019, down 21% from five years earlier and down 67% from 10 years earlier.)

Starting with our full list of 79 energy stocks (the 62 in the S&P Composite 1500 Index and the 17 held by AMLP), here are the 20 that are covered by at least five analysts polled by FactSet, with majority “buy” or equivalent ratings, that have the highest upside for the next year implied by consensus price targets:

You may need to scroll the table to see all the data. The list is sorted by the implied 12-month upside based on consensus price targets. Dividend yields are in the right-most column.

The listed company with the highest 12-month upside potential implied by the price targets is Renewable Energy Group Inc. REGI, +4.78%, which is aptly named because of its focus on biodiesel production and refining.

Chevron made the list. The stock’s dividend yield remains attractive at 5.16%, despite a 23% increase for the shares this year through May 28. But Chevron’s arch rival Exxon didn’t make the list, following last week’s big victory for activist investors who gained seats on the company’s board in an effort to push Exxon to change its strategy toward one better-suited for a long-term switch away from fossil fuels.

The second company on the list is Energy Transfer LP ET, +3.64%, which has a dividend yield of 6.16% and is expected by analysts to see its partnership unit price increase 34% over the next 12 months. It is one of four MLPs that made the list.

One pipeline operator that didn’t make the list is Williams Cos. WMB, +2.09%, which was up 32% this year through May 28. Williams is not an MLP — it has a traditional corporate structure. The shares have a dividend yield of 6.23%, and Williams, like Exxon and Chevron, has not cut its payout during the pandemic. Eighty percent of analysts polled by FactSet rate Williams “buy” or the equivalent, but the company didn’t make the list because the consensus price target of $ 28.83 was only 7% above the closing price of $ 26.34 on May 28.

It’s important to keep in mind that even at this stage of the economic recovery, dividend payouts can be reduced. And even though the analysts at brokerage firms favor these stocks, the price targets only go out 12 months, per tradition. That’s actually a short time frame for such a difficult, volatile sector.

Before committing money to any of these energy companies — or to any investment for that matter — you should do your own research and form your own opinion.

Don’t miss: Amazon and Facebook as defensive plays? Yes, along with these other stocks that are cash-flow winners

Economic Report: ‘The major question is whether rising rates will quench housing demand’: Existing-home sales surge higher, but could be set for a downturn

: ‘We haven’t been this close to reparations since the end of the Civil War’: Historic report lays out case to compensate descendants of slaves in California