The Nifty50 seems to be in a bull phase as the uptrend extended for the seventh consecutive session, taking the index above the 15,600-mark for the first time on May 31.

Metals, banking & financials, pharma and FMCG stocks helped the market close at a record high. The index formed a bullish candle on the daily charts as the closing was higher than the opening level. Experts expect the Nifty to face resistance around 15,750 in the coming sessions.

“Technically, it formed a strong bullish candle on the daily scale and continued its formation of higher highs of the last seven sessions. Now, it has to hold above 15,500 levels to witness an upmove towards a fresh life-time high of 15,750,” Chandan Taparia, Vice President | Analyst-Derivatives at Motilal Oswal Financial Services, said.

India VIX, which measures volatility in the market, dropped further to 16.88 levels, down 2.96 percent from 17.40 levels on May 28, the lowest in 65 weeks. “Falling VIX is likely to extend the bullish market momentum towards new high territory,” Taparia said.

“The Nifty50 appears to have attracted buying interest as it dipped into the bullish gap zone of 15,394–15,384 levels registered on May 28, which resulted in a robust bullish candle. Moreover, seventh consecutive positive close from the lows of 14,884 is hinting that fresh leg of upswing is in progress,” Mazhar Mohammad, Chief Strategist–Technical Research & Trading Advisory at Chartviewindia told Moneycontrol.

A breakout from the 50-day old descending channel on May 18 had opened up a higher target placed around 15,850 levels on the Nifty. However, evolving line studies are projecting teh near-term hurdle at around 15,720. Hence, as the Nifty is trading in uncharted territories, traders can go with a target zone of 15,750 – 15,850, Mohammad said.

It is critical for the index to sustain above 15,374 to retain positive bias because if it closes lower, it can be seen as an initial sign of weakness, he said. Till then, intraday dips can be an opportunity to create fresh longs but with a stop below 15,374 on a closing basis.

The options data indicated that the Nifty could see a trading range of 15,000 to 16,000 for the coming sessions.

The Bank Nifty opened slightly negative at 35,097.45 and after touching a low of 34,930, it recovered and crossed the previous day’s high.

Disclosure: MoneyControl is a part of the Network18 group. Network18 is controlled by Independent Media Trust of which Reliance Industries is the sole beneficiary. 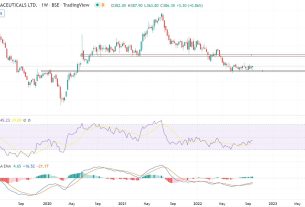 Trade Spotlight | What should you do with India Cements, Dr Lal PathLabs, Glenmark Pharma on Thursday?

Hot Stocks | Here#39;s why you should bet on Sun Pharma, Mphasis for the short term

Hot Stocks | Here#39;s why you should buy ONGC and sell Sun Pharma for short term