Wednesday was a quiet day for markets, and Thursday looks set for the same in what may be a taste of doldrums in the summer ahead.

But that doesn’t mean investors should kick back and relax in the sun just yet, because major risks to stocks remain. If a bear market is indeed on the horizon, investors need to look for new, uncorrelated assets to survive the next selloff, advised Vincent Deluard, a strategist at broker StoneX, in our call of the day. The strategist said to look at six types of assets in particular, because bitcoin and bonds just won’t cut it.

“Risks are everywhere in a time of peak liquidity, peak valuations, and peak economic optimism,” the strategist said, with stocks 50% to 100% more expensive than they were at the height of the 1990s dot-com bubble.

This sets the stage for stocks on a hair trigger. “Unfortunately for investors, traditional hedges are expensive or ineffective, or both,” Deluard said.

For the first time in 15 years, long-term Treasuries — “the ultimate risk-off asset of the past decade” — are positively correlated with stocks, and the typical inverse relationship between stock valuations and the price of options has broken down.

According to Deluard, the five main risks of 2021 are rising yields, inflation surprises, wider spread, an equity market selloff, and a “blowup” of overpriced growth stocks.

Deluard’s advice is to look at six types of assets to best protect yourself against these specific risks in the year ahead. Financials, commodities, and energy stocks are the best hedges, Deluard said, which dovetails with his bullish view on Latin American — and especially Mexican — assets. Bets on those cyclical sectors should be complemented by traditional risk-off plays such as gold and Japanese stocks, the strategist added.

“This barbell portfolio should protect investors against the main risks of 2021 at a relatively cheap price,” Deluard said. “Rare, good news in an otherwise bleak environment.” 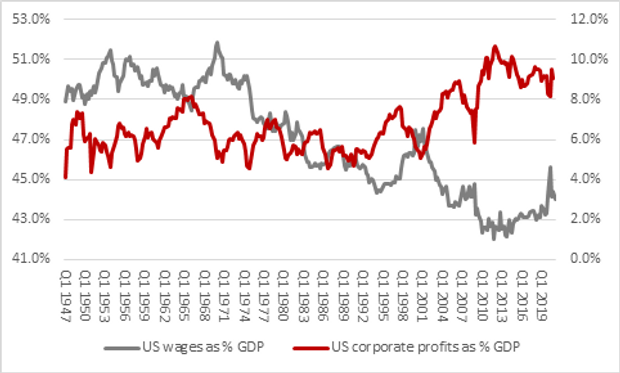 Between stories of fast-food restaurants struggling to find burger flippers and news that Amazon will hire 75,000 workers at an average pay of more than $ 17 an hour — well above U.S. minimum wage — rising pay is on the mind.

“Workers and their families may well be thinking ‘about time, too,’” said Russ Mould, an analyst at AJ Bell, who provided our chart of the day. “Since 1947, Americans’ pay has fallen by 5 percentage points as a portion of GDP. American corporate profits have increased by almost exactly the same amount.”

GM to the moon? General Motors GM, -0.77% is teaming up with aerospace company Lockheed Martin to produce an off-road, self-driving, electric-vehicle for the lunar landscape.

: Biden touts South Korean company’s $22 billion investment in U.S. manufacturing: ‘America is back to working with our allies’

Living With Climate Change: Scorched Western states and a hurricane in New York: Earth experienced one of its hottest years on record in 2021

Market Extra: At least 7 signs show how the stock market is breaking down