Dow 37,000 by the end of the summer? That seems too good to be true, since Labor Day is just three months away. In fact, all it would take is a summer rally of average magnitude.

Many on Wall Street are excitedly talking up the potential for a summer rally this year. Since its creation in 1896, the Dow Jones Industrial Average DJIA, +0.19% at some point in June, July or August has been 7.34% higher on average than where it stood at the end of May.

Before you rush to put new money into the U.S. stock market, you should know that profiting from this potential isn’t as straightforward as it seems. It would not be a good idea, for example, to simply place a market order at the end of May to sell if the Dow rises 7.34% by Labor Day. That’s because 7.34% is an average. In some years the Dow has gained far less. In fact, at times the Dow at no point in June, July or August was higher than where it stood at the end of May.

Moreover, there’s nothing special about the market’s rally potential during the summer. This is illustrated in the chart below, reflecting the Dow’s 125-year history. Each month’s column in the chart represents the Dow’s average gain from the end of that month to its higher close at any point over the subsequent three months. 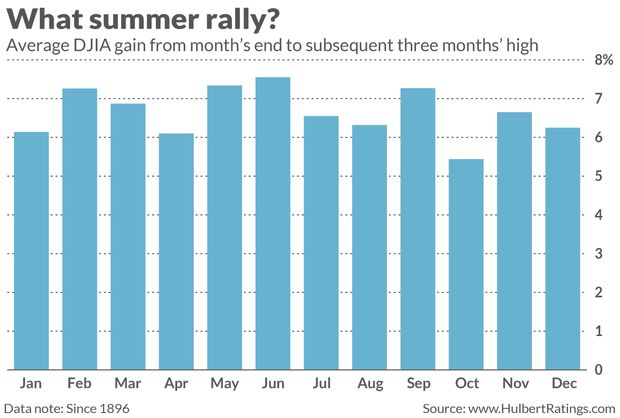 Notice that the rally potential for several other months is just as high as for May, if not higher. At the 95% confidence level that statisticians often use to determine if a pattern is genuine, there is nothing unusual about the market’s rally potential over the three months from the end of May.

The origins of the ‘summer rally’

How, then, did Wall Street ever come to believe that there is a summer rally? Though I’ve never been able to discover a definitive answer, my hunch is that it traces back to around the same time decades ago in which investors began focusing on another seasonal tendency — the “Sell in May and go away” pattern. Since Wall Street doesn’t earn any commission income if traders actually go away for the summer, it would have had a powerful incentive to concoct some narrative that could entice buyers and sellers to stick around.

A summer rally ingeniously fits the bill. Believing in it doesn’t require denying the sell in May premise — that the stock market is a below-average performer during the summer. All the “summer rally” requires is the belief that the market will rally at some point during the summer. So it has a superficial plausibility, but nothing more.

My skepticism doesn’t mean the stock market won’t rally this summer. My point instead is that, if it does, it won’t be because of the heat.

Plus: Why the bull market in stocks won’t be over until these 3 S&P 500 sectors sing