Mark Matthews, Head of Research, Asia at Julius Baer Bank believes there is reason to anticipate a catch-up in economic activity once lockdowns lift and coronavirus second wave eases.

“We can also expect a rise in state-sponsored activity. Our own forecast is for 9 percent GDP growth in the current fiscal year. But we don’t view that as a bad number at all, just because it’s not double-digit,” he said in an interview to Moneycontrol’s Sunil Shankar Matkar.

Q: Do you think with the falling COVID cases in India, the FII flow will return to India in coming months?

FII outflows weren’t big during the worst of the second COVID wave, so we shouldn’t look for big inflows now that the confirmed cases are peaking. Global, rather than local events, are more likely to determine FII flows, especially as they relate to the direction of the dollar.

The US Fed has begun to drop hints about “adjusting the pace of asset purchases” in upcoming meetings. On its own, that should mean higher rates, and therefore a higher dollar. But there are many other moving parts behind wanting to own a country’s stock market, and a stronger dollar alone shouldn’t be enough to dissuade someone from owning India.

Q: What are the COVID-proof sectors that investors could look at?

The sectors whose drivers are structural rather than tied to the cyclical ups and downs of the economy are historically healthcare, information technology, exporters, commodity producers, chemicals and consumer staples. But we expect commodity prices (with the exception of oil) to come down, and staples won’t do well if rural India is being hurt by COVID, which appears to be the case.

Even if there is a third wave, the market will be willing to look past it if a much larger part of the population is vaccinated, which will probably be the case. The Sputnik V vaccine will be imported to India as of next month, and domestically produced by August. And, much of the surplus in vaccines in developed countries like the United States will be sent to India. 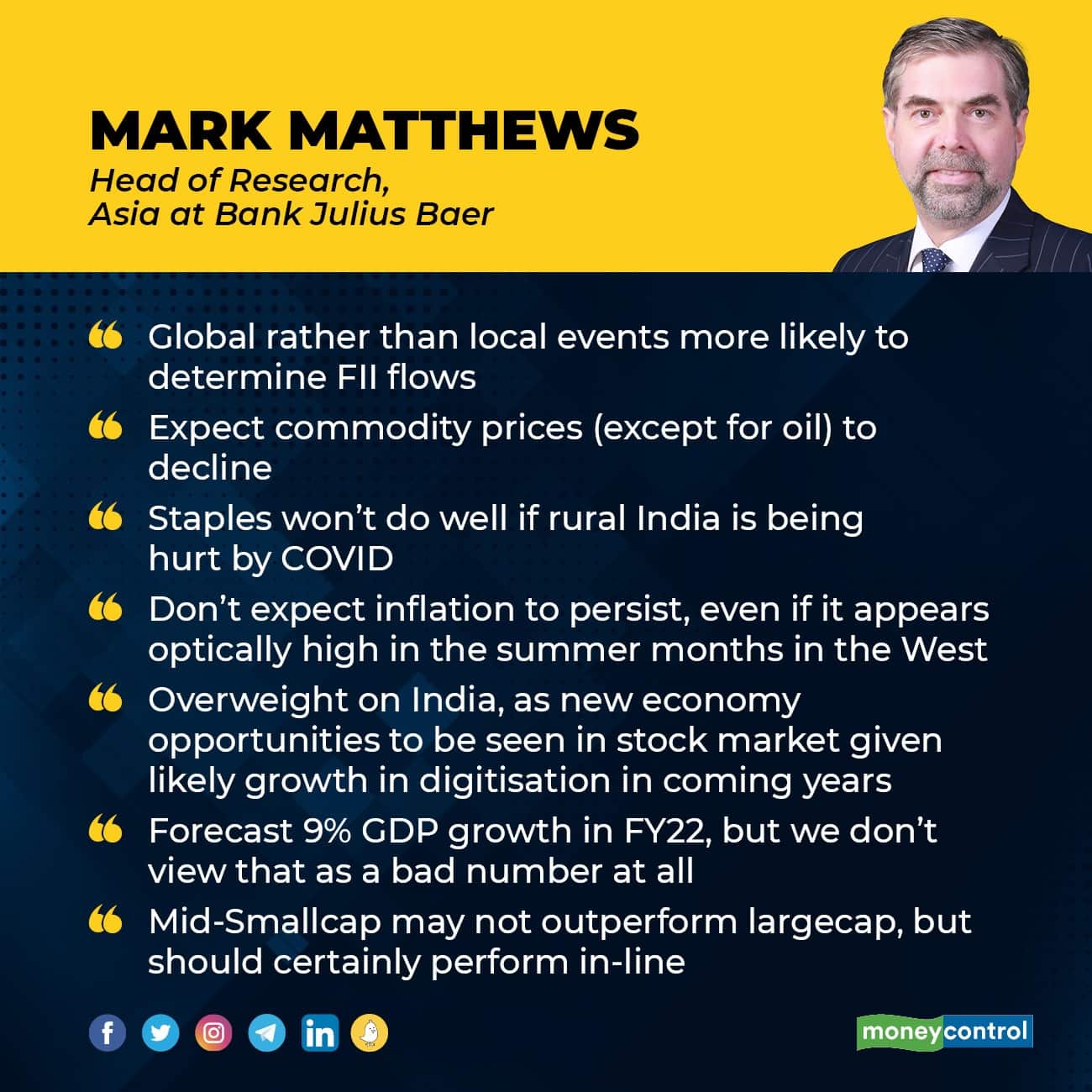 Q: Do you think globally, COVID will remain a big risk for economies?

Also, as more real world and clinical data becomes available, we are starting to see divergence in the efficacy of the vaccines. Both in terms of current efficacy and ability for modification, the messenger RNA ones appear to be best.

But most of the world is on course to be vaccinated with AstraZeneca and Sinovac, where efficacy rates are lower. What we will probably see, therefore, is subtle shifts in improvements to those two vaccines, as well as countries supplementing them with boosters of the messenger RNA ones, as production capacity in them ramps up.

By the way, the Sputnik V vaccine has efficacy almost as high as Pfizer and Moderna, and is arriving soon in India.

Q: Experts are talking about inflation risk given the rise in commodities and as a result thinking of interest rate hikes in coming quarters. Your thoughts.

In the past decade, commodity prices have followed Chinese money supply growth with a lag of approximately six months. China is the largest buyer of most commodities, so this makes sense. Chinese money supply growth has declined from 14.7 percent in January to 6.2 percent as of April. Intuitively, commodity prices should not rise in the months ahead, in fact they should decline.

Of all assets, commodities have the highest correlation with inflation. Therefore, we don’t expect inflation to persist, even if it appears optically high in the summer months in the West, a function of the base effect from last year’s pandemic.

Q: What is your strategy towards Indian equities given the current scenario?

India has the rule of law, a large and young population, of whom many are well-educated, including in the sciences. We expect the economy to increasingly digitalize in the next few years, and for many more New Economy opportunities to appear in the stock market. For those reasons, we are overweight it.

Q: Will India Inc fail to report expected double-digit growth in earnings in FY22 given the Covid-related pressure?

States where the second wave started initially like Maharashtra, Punjab and Uttar Pradesh are now showing much better trends, and new confirmed cases for the whole country are half of what they were two-and-a-half weeks ago. So there is reason to anticipate a catch-up in economic activity as the recent two months of lost activity are pushed forward.

We can also expect a rise in state-sponsored activity. Our own forecast is for 9 percent GDP growth in the current fiscal year. But we don’t view that as a bad number at all, just because it’s not double-digit.

Q: How do you read the March quarter earnings season and have you lowered your earnings estimates for FY22?

So far the March quarter has been broadly in-line. While there have been more companies guiding down their full-year estimates than those guiding up, the magnitude of the downward guidance is smaller than it is for upward guidance. So the two balance each other out.

Q: Returns in Midcap and Small Caps in the last one year as well as in the current calendar year 2021 are much higher than large cap indices. Do you think the outperformance of Midcap and Smallcap will continue in coming years?

Historically in economic upcycles, stock market rallies are broad, and all companies no matter what their size is do well. Also, while it’s true smaller companies have outperformed large ones over the past year, on a five year view they have still underperformed the large caps by 15 percent. So they may not outperform, but they should certainly perform in-line.

Daily Voice | FM likely to focus on these 5 sectors in Budget 2022: Sahil Kapoor of DSP Investment