Except FMCG, all other sectoral indices ended in the red, with the Nifty metal index declining nearly 4 percent. BSE midcap and smallcap indices fell more than a percent each.

“The index closed the week at 14,678 with the loss of nearly one percent and formed a dark cloud cover sort of candle pattern on weekly chart, which is a bearish reversal candle by nature,” said Rohit Singre, Senior Technical Analyst at LKP Securities, said of the Nifty.

“Supports are still placed at 14,600-14,500 zone and holding above the said levels structure mildly bullish and we may see some extension in the current pullback towards strong hurdle zone of 14,800-14,950 zone where one can lock in their profits,” Singre added.

On the BSE, except capital goods and FMCG, all other sectoral indices ended in the red, with metal, oil & gas, healthcare, auto and realty indices falling 1-3 percent.

Among individual stocks, a volume spike of more than 100 percent was seen in NALCO, PI Industries and Pidilite Industries.

More than 300 stocks, including CSB Bank, Adani Transmission and Shree Renuka Sugars, hit a fresh 52-week high on the BSE. 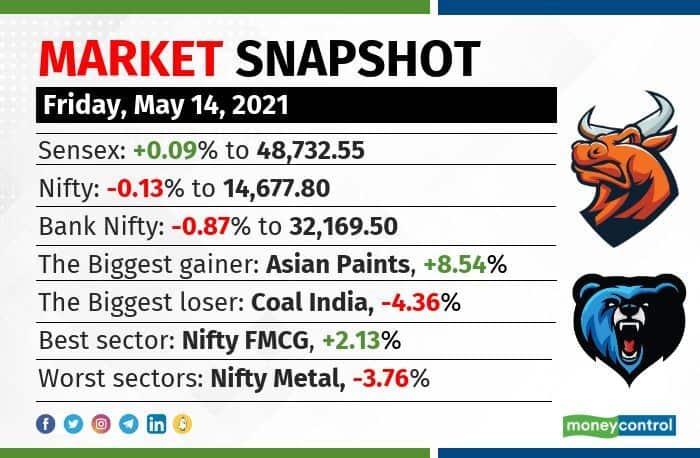 From working in a cyber cafÃ© to becoming a billionaire

IPO alert : These 4 mainboard issues hit the street next week

Infosys automating integration between own platform, CoWIN to ease vaccination process for staff