The Nifty50 failed to hold on 15,000 but managed to close higher for the fourth successive day amid volatility on April 29, the monthly expiry day for derivative contracts. The market was supported by the Federal Reserve’s decision to keep rates at zero with continuing bond-buying programme but the rising COVID-19 cases capped upside.

The index formed a bearish candle on the daily charts as the closing was lower than opening levels. Experts say 15,000 is crucial for strong upside.

Traders should remain neutral on the long side in the next session, whereas intraday traders should look for shorting below 14,810 levels for a modest target towards 14,700 levels, Mazhar Mohammad, Chief Strategist – Technical Research & Trading Advisory at Chartviewindia told Moneycontrol.

“Bulls disappointed as they failed to capitalise on the strong opening. Moreover, by the end of the day, advance-decline ratio skewed in favour of bears, hinting broad-based profit-booking around psychologically critical resistance of 15,000 levels,” Mohammad said.

In the next trading session, if the index fails to sustain above 14,815, then it can see some selling pressure with initial targets placed near 14,700 levels, he said.

However, the sentiment shall remain positive as long as the Nifty sustains above April 21’s bullish gap area present in the zone of 14,694–14,667, whereas a close below 14,667 may once again tilt the tide in the favour of bears, he added.

But if the index closes above 15,000, then that will confirm strength for the bulls and an initial target towards 15,350 can be expected.

The Bank Nifty opened gap up at 33,901.60 but failed to hold above 34,250 and moved in a range throughout the day. It concluded the day flat with minor losses of 8.3 points at 33,714.50. It formed a bearish candle on the daily scale and continued forming higher highs from the last seven sessions. 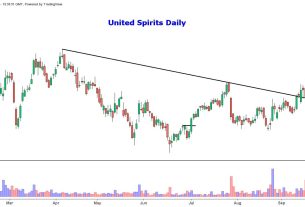 Hot Stocks | Here#39;s why you should bet on United Spirits, Axis Bank

Trade Spotlight | What should you do with KIMS Hospitals, Fortis Healthcare, Ambuja Cements on Tuesday?

Technical View: Nifty forms Doji pattern, rally only on a close above 16,349