Wall Street ended lower on Wednesday after the U.S. Federal Reserve held interest rates and its monthly bond-buying program steady and gave no sign it was ready to reduce its support for the recovery.

Despite the improving economy, the Fed repeated the guidance it has used since December, saying it must see “substantial further progress” towards its inflation and employment goals before stepping back from its monthly bond purchases.

“The Fed underscored a lot of uncertainty remains. In this kind of a backdrop, with inflation being transitory, they’ll continue to be pedal to the metal in terms of monetary policy,” said Kevin Flanagan, head of fixed income strategy at WisdomTree Funds.

The S&P 500 briefly rose to an intra-day record high after Fed Chair Jerome Powell said in a press conference that it was “not time yet” to discuss reducing the Fed’s support for the recovering economy.

U.S. President Joe Biden is expected to unveil a sweeping $ 1.8 trillion package for families and education in his first joint speech to Congress on Wednesday, senior White House officials said.

Google parent Alphabet Inc rose 2.9% and closed at a record high after reporting late on Tuesday a record profit for the second consecutive quarter and announcing a $ 50 billion share buyback.

Microsoft Corp’s quarterly report late on Tuesday met sales expectations and beat profit estimates, but its shares fell 2.8% and pressured the Nasdaq due to skepticism about one-off benefits included in the results and high hopes after a year-long rally.

A 7.2% drop in Amgen Inc weighed on the Dow after the biotech said its first-quarter sales and profit fell due to a 7% drop in its net drug prices and a hit from the COVID-19 pandemic.

Boeing Co fell 2.9% after posting a wider-than-expected quarterly loss and pausing 737 MAX deliveries over an electrical issue that has partly re-grounded the fleet.

Overall earnings per share for S&P 500 companies in the first quarter are expected to jump 39% from a year earlier, according to Refinitiv IBES data.

Advancing issues outnumbered declining ones on the NYSE by a 1.44-to-1 ratio; on Nasdaq, a 1.25-to-1 ratio favored advancers.

Volume on U.S. exchanges was 9.5 billion shares, compared with the 9.9 billion full-session average over the last 20 trading days. 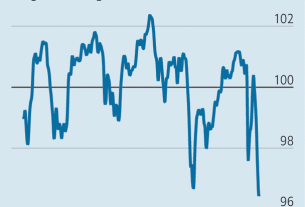 Households across the rich world have never been so gloomy