The Nifty50 continued its winning streak for the third consecutive session and closed near its three-week high on April 28 ahead of the Federal Reserve meeting’s outcome and expiry of the April derivative contracts.

The index formed a bullish candle on the daily charts and traded above its 50-day moving average (DMA).

“The bulls appear to be in the commanding position as they witnessed a steady rise in the last couple of trading sessions, which led the Nifty rally to close above its 50-day simple moving average whose value is placed around 14,800 levels. Technically speaking this should instill more confidence among bulls as the underlying trend can be strengthening in their favour,” Mohammad said.

However, a confirmation will come once the bulls push the index beyond the interim top of 14,984 and in that scenario, bigger targets of 15,350 can’t be ruled out, he said.

The Nifty needs to sustain above the bullish gap —14,695 –14,667 —registered on April 28 in and a close below the said gap zone can be considered as an initial sign of weakness, he said.

India VIX fell by 2.17 percent from 23.08 to 22.58 levels. “India VIX needs to hold below 20 to again attract bullish stance, while stable volatility is providing the buy on decline strategy in the market,” said Chandan Taparia, Vice President | Analyst-Derivatives at Motilal Oswal Financial Services.

The Bank Nifty opened gap up at 32,865.50 and escalated throughout the day. All the banking stocks were seen driving the index and it touched an intraday high of 33,777.70 levels. It outperformed the broader market and concluded the session with massive gains of 987.50 points or 3.02 percent at 33,722.80.

The index formed a strong bullish candle on the daily scale and continued forming higher highs from a  sixth session. “Now the Bank Nifty has to continue to hold above 33,500 for an upmove towards 34,000 and 34,250, while on the downside, support can be seen at 33,333 and 33,000 levels,” Taparia said.

Trade Spotlight | What should you do with Tanla Platforms, Apollo Tyres, Delta Corp on Tuesday? 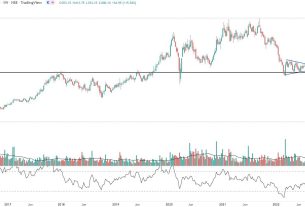 Hot Stocks | Indraprastha Gas, HDFC Bank, Shriram Transport Finance can give up to 21% return in short term; here#39;s why?

Trade Spotlight | What should you do with Hikal, KRBL, Zomato on Wednesday?