Writing a book during the lockdown is a good idea. But R Gopalakrishnan didn’t want to just write any book. After all, the former director of Tata Sons, the holding company of the conglomerate, has already penned a dozen books on management.

Instead, Gopalakrishnan set out on a unique venture, involving first of its kind applied research on Indian companies that have grown into institutions. He collaborated with five academics from SP Jain Institute of Management and Research, the premier management school based in Mumbai.

The team started off with the research in 2018, with the work culminating during the lockdown. In all, the six spent 700 hours in research, writing and editing to come out with Shapers of Business Institutions, a collection of six books, each throwing light into the mindset, behaviour and actions (or MBA as Gopalakrishan puts it) of six titans of corporate India – Deepak Parekh, Kiran Mazumdar-Shaw, Harsh Mariwala, Uday Kotak and Anil Naik.

The sixth is on TCS as an institution, with the book throwing light on the contribution of founder FC Kohli and his successor S Ramadorai, in building a company that laid the foundation for India becoming an IT exporter.

“The research project was a bit like an archaeological process. Through desk research, we dug records to appreciate what makes companies into institutions.  After forming a hypothesis and pilot validation, our team discovered a 3*5 matrix of capabilities that shapers of institutions appear to practice,” Gopalakrishnan told Moneycontrol.

“We found these capabilities to be quite distinctive as compared to the practices of leaders of  ‘good companies’,” he added.

Each book, published by Rupa, is a fast read, comprising 160 pages, and focuses on the matrix to explain what led to a Uday Kotak or a Harsh Mariwala to build the institutions that they built.

“We did not study centenarians like Tata, Bajaj, Godrej and Levers. We sought out only Gen-L institutions where we could interview the living shapers – companies which came into prominence around liberalisation period,” reasoned Gopalakrishnan. 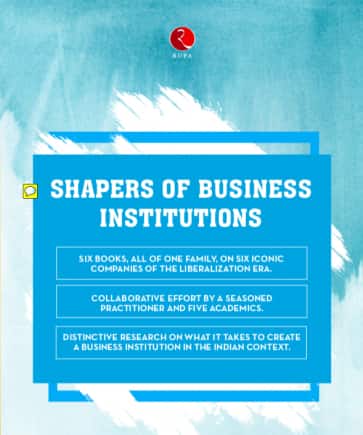 The challenge for the authors would have been to throw a fresh light on six – the institutions that have been well covered, and followed, by the media and investor community. For instances, not all the anecdotes included in the pages are new.

But when put together, that too succinctly, these six part biographical and part management books succeed.

The book on Naik was particularly enjoyable, almost like the Bollywood movies he would watch each day. The story of his life and career, from a Gujarat-medium bred village boy, to the shop floor, and then to the corner room at L&T, is remarkable. He fought many battles, including with labour unions to some of the biggest corporate names, and thereby transforming L&T into a true conglomerate that also became a favoured stock for investors.

The question now is, does India Inc have its six big shapers?

Private hospitals can charge up to Rs 250 per dose of COVID-19 vaccine: Government