Indian market witnessed a volatile week as bears took control pushing the Nifty lower for the third consecutive day in a row below 14,400, but small & midcap stocks outperformed on a relative basis.

Rise in COVID cases and resultant lockdown-like restrictions in various states of India weighed on investor sentiment during the week ended April 23. On the global front, a possible hike in the Capital gains tax in the US also kept investors on the edge.

“Increasing restrictions are forcing investors to reconsider the current high valuations due to fall in earnings. On the global front, a possible hike in capital gains tax in the US also took a toll on global equities,” Vinod Nair, Head of Research at Geojit Financial Services told Moneycontrol.

Small & midcaps showed resilience as smart money moved into stocks that have the potential to display grow in near future, suggest experts.

Investors preferred to buy stocks in the smallcap space despite muted trends seen in the benchmark indices. There are as many as 31 stocks that rose 10-30% for the week ended April 23. These include GNA Axles, Tejas Network, Suven Pharma, Inox Wind and Panacea Biotech. 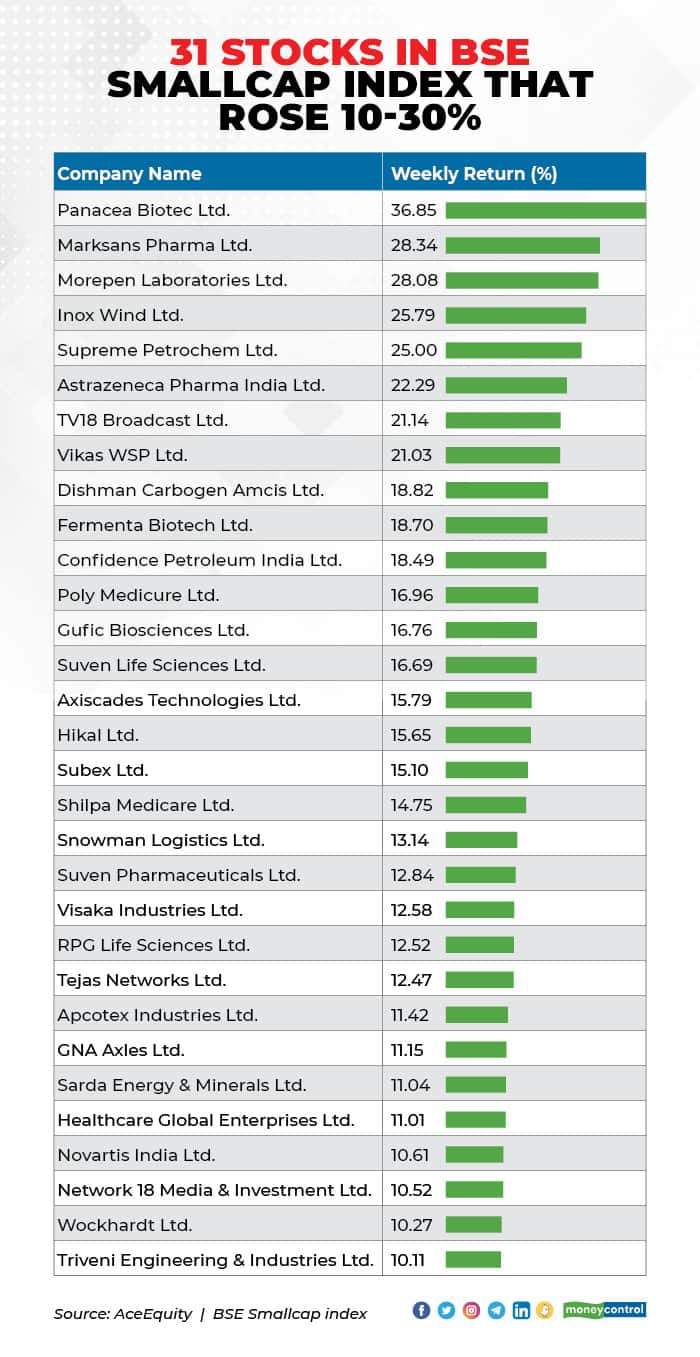 “At the broader level, markets are likely to be volatile but investors are now adopting a stock-specific strategy by allocating funds to fundamentally strong stocks with growth prospects,” Nirali Shah, Head of Equity Research, Samco Securities told Moneycontrol.

What to watch out for?

The market is likely to remain volatile in the coming week amid April F&O Expiry as well as upcoming FOMC meeting on April 27-28. Investors will also keep an eye on extension of lockdown in states and COVID situation.

“Any central rate change will have a ripple effect on other rates, including foreign exchange rates and bond prices which may have a sizable influence across emerging markets,” said Shah of Samco Securities.

On the economic front, markets will watch out for infrastructure output data for the month of March.

Earnings for the quarter ended March have been relatively stable. Markets will react to HCL Technologies results which came post market hours on April 23, and ICICI Bank Q4 results that will be declared on April 24.

“Earnings outcome from Nifty majors would induce stock -pecific volatility. We maintain our cautious stance for the markets in the near term as increasing restriction would adversely impact economic activity and earnings,” Ajit Mishra, VP – Research, Religare Broking Ltd.

The Nifty50 index closed in the red for the third consecutive week, but it managed to close above crucial swing low of 14250-14300 levels. The coming week is likely to remain volatile ahead of the April F&O series expiry on Thursday.

Analysts advise investors to stay cautious, and wait for a breakout above 14800-15000 that would give chance to bulls to make a comeback but before that 14500 would act as a stiff hurdle.

Among sectors, PSU Banks, Reality and FMCG indices shed over 3 percent whereas strong buying was seen in selective Media, Metal and Pharma stocks.

Meanwhile, Bank Nifty recovered sharply from 30405.65 level, which is positive for the banking stocks. The index closed 0.19 percent lower at 31,722 on Friday.

“Last week was volatile for traders, and a sharp pullback rally is not ruled out if the Bank-Nifty succeeds to trade above 30800. Technically, on daily and weekly charts the index has formed lower top formation, and the non-directional intraday activity clearly indicates indecisiveness between bulls and bears which will continue in the short run,” Shrikant Chouhan, Executive Vice President, Equity Technical Research at Kotak Securities told Moneycontrol.

Chouhan further added that ahead of the monthly F&O expiry, the sectors which would be in focus are banking, metal and pharma.

After The Bell: Nifty below 14,500, what should investors do on Wednesday?

Where does Value Investing stand Today?