While many investors have focused on the performance of travel and leisure companies to gauge the reopening of the economy, there is also a lot that can be learned from industrial companies that actually make things, that are used to make the things people use in their daily lives.

Dow Inc. DOW, +1.94% reported Thursday an adjusted profit that more than doubled, boosted by a 19% surge in local prices, with gains seen across all business segments.

The company produces specialty materials and chemicals used by a wide range of manufacturers, including those that make cars, cosmetics, food packaging, toys and infant products and semiconductors.

Meanwhile, copper producer Freeport-McMoRan Inc. FCX, +5.18% reported Thursday that it swung to a first-quarter net profit that was the highest in almost three years, and revenue that nearly doubled, as the average realized price for copper jumped 62%.

Often referred to as “Dr. Copper,” the metal’s performance can help diagnose the underlying health of the economy given its broad uses, such as for communications, construction, computers, cars and coins. 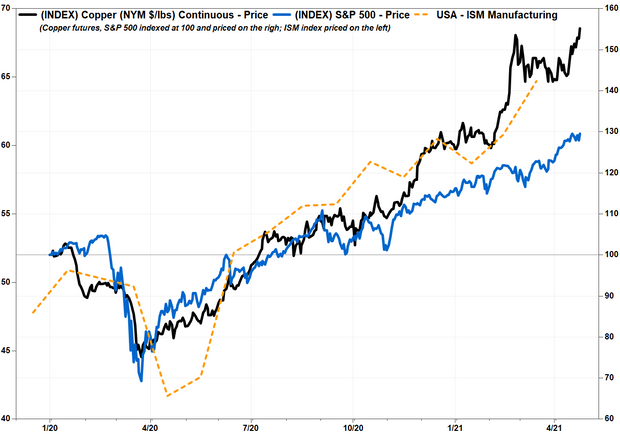 There’s also steelmaker Nucor Corp. NUE, +2.29%, which reported a record first-quarter profit of nearly $ 1 billion, on revenue that topped $ 7 billion, as average sales prices per ton jumped 25% from a year ago, with the “favorable” demand environment expected to continue through the rest of 2021.

The companies’ results help put in context the bigger-than-expected increases seen in wholesale prices and consumer inflation for March.

Art Hogan, chief market strategist at broker and asset manager National Holdings Corp., said the price increases are a sign of real, underlying strength in the economy, as they are reflecting a broad surge in demand.

And any resulting inflation spike is likely to be temporary, Hogan said, as capacity utilization, which was hampered by pandemic-related lockdowns, will “ramp up” in the coming months to boost supply, which will help prices stabilize.

That’s basically what Federal Reserve Chairman Jerome Powell has been saying this year, and the reason the Fed hasn’t started tapping the brakes on economic growth. Read the minutes of the Fed’s January policy-setting committee.

“When you shut manufacturing down, it’s hard to start it back up,” Hogan said. “The supply reaction takes longer than the demand function.”

As Freeport-McMoRan Chief Executive explained on the company’s post-earnings conference call with analysts regarding the rise in copper pricing, according to a FactSet transcript: “You can’t turn on the valve quickly to add new mine supply, and when you can’t do that and volume and demand rises, that translates into higher prices.”

And Dow Chief Executive James Fitterling said in a call with analysts that it wasn’t just the pandemic that caused supply constraints. He said Winter Storm Uri caused a “far-reaching,” but temporary, impact on supply. “Our colleagues quickly and safely got our units back online, some of which began coming up within a week of the storm,” Fitterling said.

: ‘The calm before the storm’: Reducing healthcare costs is a big priority for Americans in midterm elections