When the U.S. Senate surprisingly fell into Democratic hands after the Georgia runoff race, the financial market impact was monumental.

The move was most obviously seen in the bond market — the yield on the U.S. 10-year Treasury BX:TMUBMUSD10Y shot up to as high as 1.75% from 0.92%. That is because the razor-thin majority in the Senate allowed the Democrats to push through a $ 1.9 trillion coronavirus relief package without any Republican support, and is making it possible, though not definite, that a multi-trillion-dollar infrastructure package could get through Congress.

In Europe, an election of similar stakes is brewing in the race to succeed Angela Merkel as chancellor. The winner could unlock spending in Europe’s notoriously tightfisted economy.

Having picked Armin Laschet to lead the party, election polls suggest Merkel’s party, the Christian Democratic Union, will still rule the eurozone’s largest economy. According to Politico’s polling tracker, the CDU alliance with the Christian Social Union garners 28% support. The real shift, though, is the Green Party’s success so far, with 21% support, according to the Politico poll tracker. That would put the party led by Annalena Baerbock with a strong likelihood of joining a coalition and displacing the center-left Social Democratic Party. 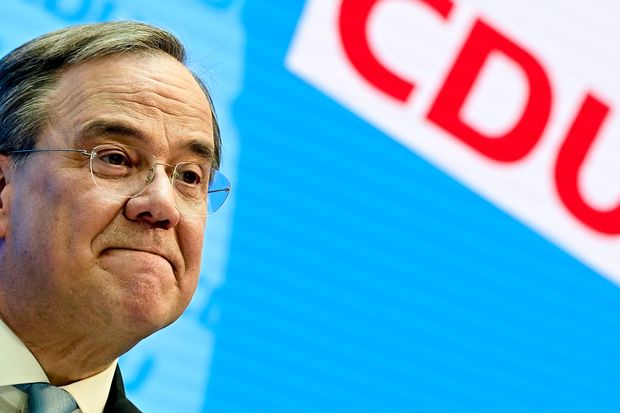 The betting market PredictIt assigns a 58% chance of Laschet being chancellor on December 31, followed by Baerbock on 28%, and somewhat improbably, Merkel on 9%.

Christian Schulz, an analyst at Citi, says a so-called black-green coalition is the only feasible outcome of the September 26 election.

The Greens would likely push for more government spending in favor of environmental initiatives. They potentially could exclude public investment from Germany’s zero-deficit rule, according to Dario Perkins, managing director for global macro at TS Lombard, a London-based research service.

Citi’s Schulz agrees. He says he would expect a black-green coalition to have “ambitious” climate protection policies backed up by large public investment, but paid for by borrowing rather than tax hikes. A two-thirds majority would be needed to bypass the constitutional debt brake, which Schulz says is possible given the SPD and Left Party, in opposition, could agree.

It is a development the financial market is starting to pricing in, though it is hard to discern from the improvement in Europe’s COVID-19 vaccination efforts after a slow start.

The yield on the 10-year German bund BX:TMBMKDE-10Y did rise after Baerbock’s selection, and the euro EURUSD, -0.09% has recovered from its late-March lows around $ 1.17.

It isn’t inconceivable that the more charismatic Baerbock could become chancellor and not just a partner in a coalition government. “A left-wing surprise in September is ultimately an upside risk to German and Eurozone assets,” say analysts at BCA Research. “A proactive fiscal turn would be positive for growth prospects and support German and European cyclical sectors such as industrials and materials, as well as the currency. A lower European breakup risk premium also supports the euro and would result in a narrowing of peripheral bond yield spreads.”

Holger Schmieding, the chief economist at Berenberg Bank, says both Baerbock and SPD leader Olaf Scholz are pragmatic — but wouldn’t be if they governed together, rather than with the CDU/CSU alliance.

Berlin’s rent cap — overturned by a German constitutional court — would be the type of policy such a government would pursue, he says. “A ‘green-red-red’ coalition between the Greens, the SPD and the left-wing Left Party without any corrective element from CDU/CSU or FDP could herald a major shift in German policies, notably towards tighter labor, housing and product markets regulations that would reduce German trend growth,” he says.

Retirement Weekly: Is investing in foreign stocks a good idea?