With few days still to go, April 2021 has become quite a game-changer for India. There were waves of volatility in the financial markets, with the Indian rupee weakening by more than 1.5 percent.

The Sensex and the Nifty, too, have plunged by almost 4.5 to 3.3 percent, respectively, in the month. The US dollar index fell by almost 2 percent while S&P 500 posted more than 4 percent gains. This clearly shows that the prime reason for the fall in Indian equities and currency was more domestic in nature.

Apparently, a new variant of the coronavirus, which has a so-called double mutation, has led to a tsunami-like surge in cases in India, making it the world’s second worst-hit country. Over the last weekend, a total of 2,60,813 new cases were reported across the country, taking the total number of confirmed infections to 14.78 million.

According to WHO, five states—Maharashtra, Kerala, Karnataka, Tamil Nadu and Andhra Pradesh—contributed more than 55 percent of the total cases. This devastating expansion of the outbreak continues to overwhelm the health infrastructure, cremation and burial grounds in most states. The surge has led to stricter restrictions and lockdowns, which worried investors about more economic pain leading to massive across-the-board selling. As per reports, FPIs have pulled out a net Rs 4,615 crore from Indian markets in April so far. 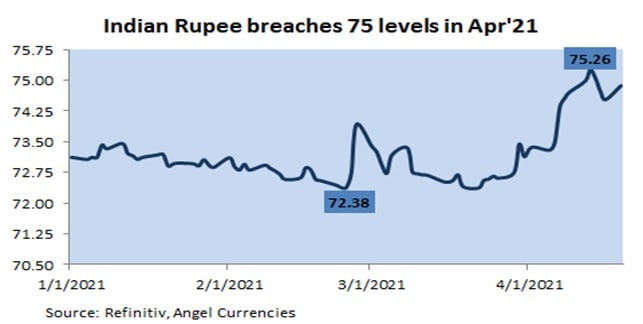 Apart from the above reasons, another factor that played on market sentiment was the RBI policy statement. The committee decided to keep the repo rate unchanged at 4 percent and retained its “accommodative” policy stance as long as necessary to sustain growth on a durable basis.

The central bank also pledged to buy up to Rs 1 lakh crore of bonds in Q1 of FY22 to cap borrowing costs and to support economic recovery, sending a wave of relief through the sovereign debt market. A day before the policy meet, the 10-year Indian benchmark yield was trading at 6.12 percent. Following RBI’s explicit assurance of debt purchases, the yield dropped to 6.01 percent within two days.

In contrast, the rupee weakened sharply, crossing 75 levels as the RBI’s dovish stance was seen diverging from the hawkish stand taken by central banks of other emerging countries such as Turkey, Russia, and Brazil.

A lot of traders who were expecting the rupee to appreciate had built up a lot of carry trades but post the policy release, foreign portfolio investors chose to unwind some of these positions, leading to a depreciation in the currency.

All of the above factors have kept the local unit under pressure, making it one of Asia’s worst-performing currencies in April. There is a possibility of that this weakness will continue for some more time, leading the currency to cross 76 levels in the near term .

The government’s effort to control the rising coronavirus cases by opening up vaccines to all citizens above the age of 18 from May 1 could provide some initial relief but one should not forget that this process will not immediately control the infections.

It will take weeks and months to control the pandemic. Also, newer restriction and lockdowns have already weakened the economic activities and will worsen it more, causing more outflows. The RBI, on the other hand, will try hard to suppress this huge volatility in the rupee by intervening via state-owned banks but they have their own limitations.

With many top-notch banks and brokerage houses downgrading India’s GDP forecasts for FY22, it is important for the country to bring the COVID-19 cases under control to avoid further revisions, which would invariably affect equities and the rupee.