Asian shares rose on Tuesday, led by a stronger Chinese opening and shaking off the initial drag from tech-driven Wall Street losses, while the dollar stayed at multiweek lows against other major currencies.

Elsewhere, Japan’s Nikkei dropped 1.84%, as the country continues to grapple with a resurgence in COVID cases. Australia slipped 0.33%.

Hong Kong fell 0.11% although Chinese food delivery giant Meituan’s shares rose 1.59% after the company said it had raised a huge $ 9.98 billion through an equity and convertible bond sale.

The electric-car maker slid 3.4% after a Tesla vehicle believed to be operating without anyone in the driver’s seat crashed into a tree on Saturday north of Houston, killing two occupants.

“This morning in Asia looks like a continuation of what we saw last night, where tech stocks got hit in the U.S.,” said Mick McCarthy, Chief Markets Strategist, CMC Markets.

McCarthy said that the falls in Japan were striking given the yen strength caused by the falling dollar, which would normally be supportive for Japanese stocks, adding he thought this would change one way or the other later in the day.

However, e-mini futures for the S&P 500 rose 0.13%, suggesting markets could bounce back later in the day.

In currency markets, the dollar continued its recent weakness, falling further from six week lows it hit on Monday.

“In our view, USD can remain heavy this week as focus shifts from U.S. economic outperformance to the improving global economic outlook more broadly,” wrote analysts at CBA in a research note.

In Asian trade, the dollar dropped 0.08% against the yen, while the Australian dollar gained 0.14% and the Euro gained 0.07% on the dollar respectively. 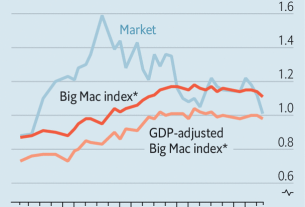 Dollar-euro parity may be justified. But the yen looks cheap as chips