The benchmark Nifty closed in the green on strength in late trade amid volatility, even as traders turned cautious due to increased restrictions in several states to control the coronavirus spread. Banking & financials, metals, pharma and select IT stocks helped the market close higher.

The index formed a bullish candle, which resembled a hammer pattern on the daily charts. Experts say 14,300 is expected to be crucial for further downside, while the upside seems to be capped around 14,650-14,700.

The Hammer is a bullish reversal pattern formed after a decline. It consists of no upper shadow, a small body, and long lower shadow. The long lower shadow signifies a bounce back after testing support, where demand is located.

Traders with long side exposure should book profits in the 14,650–14,700 levels in the next trading session, Mazhar Mohammad, Chief Strategist – Technical Research & Trading Advisory at Chartviewindia told Moneycontrol.

But if the Nifty closes below 14,300, then weakness shall re-emerge and till such breakdown, the near-term trend can be expected to remain sideways with a positive bias, he said.

The banking index continued to outperform the broader market. It formed a bullish candle on the daily scale with a long lower shadow. “It has to hold above 32,000 for an upmove towards 32,500 and 32,750, while on the downside, support can be seen at 31,500 and 31,250 levels,” Chandan Taparia, Vice President | Analyst-Derivatives at Motilal Oswal Financial Services said. 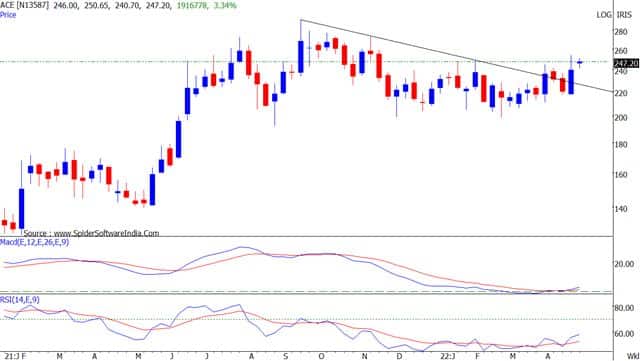 Hot Stocks | Bandhan Bank, Action Construction Equipment, Ceat can give up to 15% return, here#39;s why

Hot Stocks | Bandhan Bank, Action Construction Equipment, Ceat can give up to 15% return, here#39;s why