Migrant workers going back home due to lockdowns. [Image: Shutterstock]

As India faces a massive rise in COVID-19 cases, and the possibility of more localized lockdowns becomes a reality leading to a possible drop in economic activity, analysts warn that GDP forecasts for 2021-22 could be revised downwards.

So far, Goldman Sachs and Nomura have cut their GDP forecast for the fiscal year which began April 1.

Goldman Sachs has cut its forecast to a 10.5 per cent growth from 10.9 percent earlier, saying that a record number of pandemic cases and a host of key states announcing stricter lockdowns of late, have fuelled serious growth concerns, leaving investors worried about the risks to macro and earnings recovery.

Nomura has gone for an even steeper cut. It now sees GDP growth for 2021-22 at 12.6 per cent, down from 13.5 percent earlier. “Daily new COVID cases under the second wave have now exceeded the first wave peak, and more states have joined the worst-affected state of Maharashtra in entering quasi- lockdown,” Nomura said.

Economists of other agencies concur, saying that the impact of rising COVID cases and more localized lockdowns will have a significant impact on their GDP forecasts.

Soumya Kanti Ghosh, Chief Economic Advisor of State Bank of India, told Moneycontrol: “There is going to be a significant impact on GDP. It is difficult to identify the quantum of that impact right now. With more and more localized lockdowns, now that the spread is much more than last year, the impact on the economy will be more than what was earlier anticipated.”

Data over next few weeks crucial

“For April-June, we had earlier expected a GDP expansion of 27.5 per cent, boosted by the low base. With the surging cases and evolving restrictions, the pace of GDP growth in the ongoing quarter may be tempered to 20-25 per cent,” said Aditi Nayar, Chief Economist, ICRA Ltd.

Both Nayar and Ghosh said they will monitor high frequency data, including mobility index, industrial production, manufacturing sentiment, power consumption and toll collection data, over the next few weeks.

Ghosh said he is likely to revise his GDP forecasts for the year in May, depending on the spread of the second COVID ‘wave’, while Nayar said she will take a relook at her forecasts after the official GDP data for January-March quarter comes out on May 31.

Nayar added: “The extent to which restrictions are imposed across multiple states on manufacturing, as well as the availability of migrant labour will have a critical bearing on the supply disruptions that may emerge. With sentiment souring, there may be some loss of demand in H1 FY2022, especially in the contact-intensive sectors, and some shifting of demand from H1 to H2 FY2022.”

Meanwhile, global ratings agencies Fitch and Moody’s, though maintaining their forecasts for now, have said that the rise in cases poses a big downside risk. 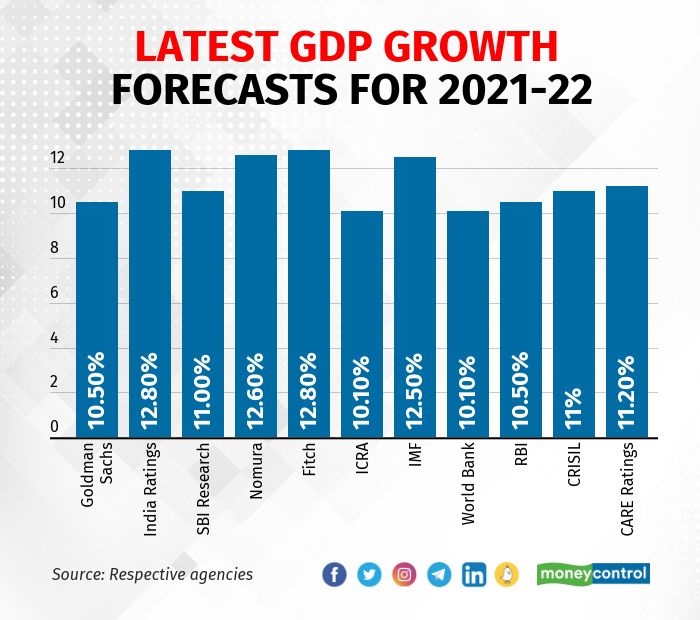 Moody’s said earlier this week that the second wave and new restrictions imposed to contain the surge pose a credit-negative threat and risks weakening the country’s economic recovery. “The second wave presents a risk to our growth forecast as the virus management measures will curb economic activity and could dampen market and consumer sentiment,” it explained.

India may scrap e-commerce policy due to lack of unanimity: Report