Nifty50 is down 6 percent from the record 15,431 in Feb 2021 and has fallen below crucial short-term moving averages, which traders say is a bearish signal.

Although the index bounced back after touching 100-DMA placed at 14282 —the trend is likely to remain volatile as long as Nifty50 trades below 14800-14900 levels, suggest experts.

The 50-DMA, also known as the short-term moving average, is considered by many traders as a signal of the near-term trend of the market. As long as the index trades above these levels it acts as crucial support while a break below may signal a bearish outlook.

The index bounced back after retesting 50-Days EMA in at least 11 out of previous 17 trading sessions on the daily charts, data showed.

For the bullish sentiment to return, a breakout above 50-DMA amd 50-day EMA is required. If the index consistently trades below this average then it could be a sentiment dampener and the impact is seen in broader markets as well.

Not just Nifty, as many as 302, or more than half of the stocks in the NSE500 index, are trading below this crucial short-term moving average.

“Moving average (MA) helps traders in multiple ways and 50-DMA is among the top MAs used by the participants to gauge the trend of the underline instrument and also for trading signals when combined with other MA or indicators,” Ajit Mishra, VP Research, Religare Broking Ltd told Moneycontrol.

“It signifies the first important support during an uptrend and resistance in case of a downtrend,” he said. 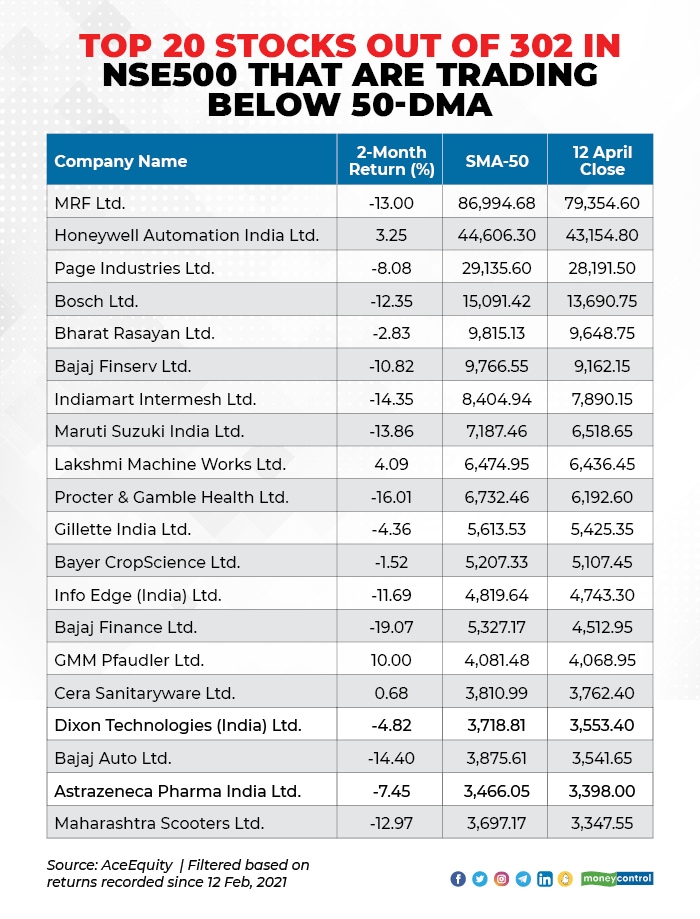 What should investors do?

50-DMA is just a signal and traders should not consider it as the final word but as a sign that the near-term trend could be tilting towards bears. Before one decides to buy or sell, other parameters such as volume in the given period, oscillator, reasons for the selloff (internal or external), etc. among others.

Not every stock that is trading below the 50-DMA should be considered as a short sell.

Based on the list of stocks that are trading below 50-DMA, Mishra feels that auto and banking stocks can be considered for short-term trades. “Within these sectors, traders may consider HDFC Bank, SBI, Maruti, and Hero MotoCorp for fresh buying,” he said.

The last time when Nifty50 convincingly broke below the 50-DMA was in February 2020, and the index hit a low of around 7500 in March 2020, before bouncing back.

Nifty50 reclaimed 14,500 on Tuesday after suffering a knee-jerk reaction in the previous trading session. But, the Nifty is still not out of the woods as additional curbs to contain the pandemic could weigh on sentiment.

“The market could trade between the levels of 14,550-14,250 on the Nifty50 on Thursday. Above 14,550 on the Nifty, the index could reach 14650-14670,” Shrikant Chouhan, Executive Vice President (Equity Technical Research), Kotak Securities told Moneycontrol.

Chouhan said as long as the market does not break 14,250/47,690, it will remain in the trading range. The focus should be on insurance and technology stocks.

Sensex posts a rebound as India Inc, US and Asia lift stocks