Asian shares were on the backfoot on Thursday following mixed cues from Wall Street where a sharp sell-off in the largest bitcoin exchange Coinbase hit tech shares while the dollar index struggled near one-month lows.

MSCI’s broadest index of Asia-Pacific shares outside Japan paused after two straight days of gains. It was last at 690.53, a long way from a record high of 745.89 touched in February.

Japan’s Nikkei rose 0.2% while South Korea’s KOSPI index was up a tad.

Australia’s benchmark index slipped 0.4% as miners were dented by weaker prices for iron ore and coal.

”However, the back up in treasury yields has begun to exert a valuation test on some parts of the global equity markets with value outperforming growth,” Jefferies analysts wrote in a note.

”China has now recovered enough that policymakers can afford to be more conservative and worry more about containing debt and property market risks. That will be a headwind to China equities, despite the solid economy,” Schowitz added.

Chinese shares started in the red on Thursday with the blue-chip CSI300 index down 0.2%.

JPMorgan Asset Management is less keen on tech shares, which Schowitz said, should have less upside to earnings expectations in the near-term and are ”very expensive” relative to value.

Overnight, Wall Street ended mixed with the tech sector the biggest underperformer after Coinbase was sold off on its listing day, dragging the Nasdaq lower.

Coinbase’s listing coincided with a record price for Bitcoin, which rose to just under $ 65,000 but the euphoria proved to be short-lived as the stock fell nearly 20% from its opening level to trade at $ 328.

”That would be a bit painful if you bought the stock at its intraday peak of $ 429.54,” said NAB strategist Rodrigo Catril.

In currencies, the U.S. dollar was on track for a fourth consecutive day of fall against its major counterparts.

Forex investors are keeping an eye on Treasury yields for direction with a potential market panic about accelerating inflation seen as the biggest risk to sentiment.

Major policymakers, including the U.S. Federal Reserve, have repeatedly said there is still plenty of labour market slack to keep inflation in check for a several years though there might be temporary spikes which they are willing to overlook.

The Australian dollar hovered near three-week highs at $ 0.7736 after posting its biggest one-day percentage gain since Feb. 19 on Wednesday. Its New Zealand peer was upbeat at $ 0.7160, a level not seen since March 23.

In commodities, oil gave back some of the gains from Wednesday when it climbed nearly 5% on signs of increasing crude demand. 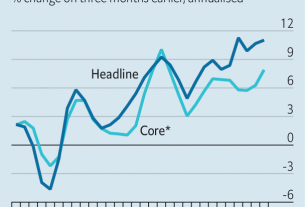 The ECB’s latest attempt to hold the euro zone together

Wall Street rally as US set to avoid debt default