The Reserve Bank of India (RBI), on April 7, said the retail inflation is likely to be at 5 percent in Q4 FY21, against 5.2 percent forecast earlier.

RBI Governor Shaktikanta Das said that Consumer Price Index (CPI) inflation trajectory is likely to be subject to both upside and downside pressures.

Food inflation will depend on progress of the south-west monsoon and taxes on petroleum products, the RBI governor noted.

“Within an overall food inflation print of 4.3 percent in February, five out of twelve food sub-groups recorded double digit inflation. While fuel inflation pressures eased somewhat in February, core inflation registered a generalised hardening and increased by 50 basis points to touch 6 percent,” the MPC said in its statement.

“The evolving CPI inflation trajectory is likely to be subjected to both upside and downside pressures. The bumper food grains production in 2020-21 should sustain softening of cereal prices going forward,” the statement added, talking about the outlook.

The central bank also retained Gross Domestic Product (GDP) growth of 10.5 percent for the fiscal year 2022 and said global growth is gradually recovering from the pandemic-triggered slowdown, but remains uncertain. In the previous policy review, the RBI had projected the FY22 GDP growth at 10.5 percent.

The CPI-based inflation has been inching up in the recent months primarily triggered by food prices.

The CPI or retail inflation rate for the month of February 2021 surged to 5.03 percent, the Ministry of Statistics and Programme Implementation (MoSPI) said on March 12, triggered by rise in food inflation and fuel. 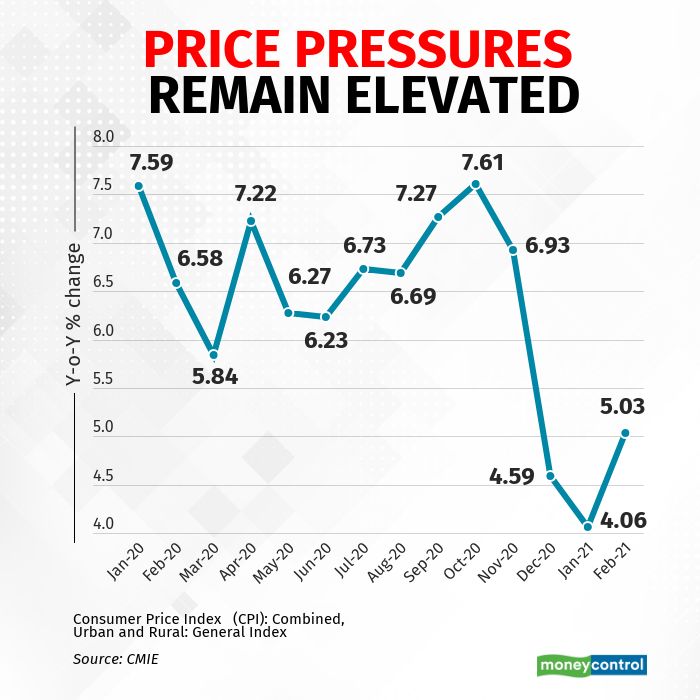 A persistent high retail inflation has been worry for the policymakers which has essentially limited the rate-setting panel’s ability to cut the key policy rates to support the economy that is fighting an economic contraction.

In the last policy review, the RBI had said that core inflation outlook is influenced by cost-push pressure seen in recent months and noted that the CPI moved below 6 percent supported by a fall in vegetable prices and favourable base.